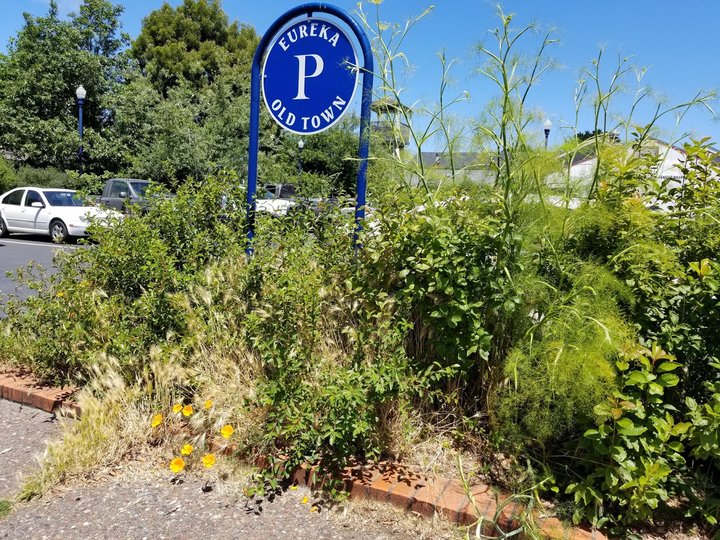 Photos of the overgrown garden provided by the City of Eureka.

A native plant garden in Old Town Eureka has been stripped bare after a pruning dispute between the City of Eureka and a local volunteer.

Monty Caid, the local volunteer previously tasked with caring for the garden, said the City of Eureka destroyed a decade of hard work last week when city employees removed huge portions of the public garden at the corner of 2nd and H Streets.

“On Friday I got an email saying [the City is] taking over the management of the area, so I drove by and nothing had happened yet,” Caid said. “There was some encroaching vegetation in the area, but it was hard to access due to parked cars. I came back at 5 p.m. with a tool after the cars were gone and it was totally leveled. Ten-year-old native plants chopped to the ground and taken to the dump. Ten years of effort taken away without any discussion. Ten years of my time wasted.”

Eureka Community Services Director Miles Slattery, however, said Caid has shirked his pruning duties for years, allowing the garden to sprawl out into an adjacent parking lot and become a liability.

“What happened was, back in 2008 we had significant budget cuts and lost park maintenance workers, and in 2009 Monty offered to maintain the vegetation and parking lot,” Slattery said. “He planted the garden, and once it matured, [the city] met with Monty and said it fully appreciated his work, but he needed to make sure all walkways and parking spaces are free of limbs.”

Slattery said that despite numerous meetings in the past, the trees and plants growing into the nearby public parking lot continued to be an issue.

“Every year we would receive a lot of complaints about the parking lot and liability issues,” Slattery said. “If a branch scratches a car or hits someone in the eye, the city is liable. We made this clear to monty over a number of years. Every year we would notify him and he was admittedly opposed to trimming in early summer months so he could wait to harvest seeds.”

Last week, the City decided enough was enough, and slashed the garden down to the nub, leaving Caid feeling disrespected after years of volunteer work around the city.

“They could have kicked me out and tried to manage it correctly, but they pruned them the way they wanted,” Caid said. “Instead they erased 10 years of community investment. This is the way they treat a city volunteer.”

While Slattery agreed that the city’s trimming was excessive, he said it was done to save the city time and resources.

“The majority of the bushes are still there; the vines may or may not come back,” Slattery said. “It’s definitely a stark difference with the trees limbed up; we do go a little bit overboard, but it’s so we don’t have to be back there trimming every month.”

The condition of the garden after the city’s prune job.

Caid meanwhile, said he suspects the issue had more to do with the homeless people camping under the overhanging foliage than the lack of pruning.

“They act like the garden is inviting the homeless in, when that needs to be a completely separate issue,” Caid said. “Police want to be able to drive by and see all the way into parking lot.”

Litter in the garden.

Slattery, meanwhile, said the issue had nothing to do with homeless people camping in the area.

“It had absolutely nothing to do with homeless issues,” Slattery said. “During all this time, there have been multiple complaints about the homeless there, but this was a liability issue about a public parking space. We had huge bushes encroaching into the parking lot — at least six feet in one area — and people having to back up to open their car doors. So we took it over and limbed-up everything.”

“I did not take this decision lightly,” Slattery said. “We tried to seriously work with him for six years. It’s been a very long time and we’ve maintained a very good relationship and we tried to make this happen and it wasn’t happening.”

While the city has moved forward with the tidiness of its parking lot, Caid said he’s considering ending his volunteer work for the city after the mature garden he’d cared for for so long was destroyed in a day.