GROWING OLD UNGRACEFULLY: Something About Death » 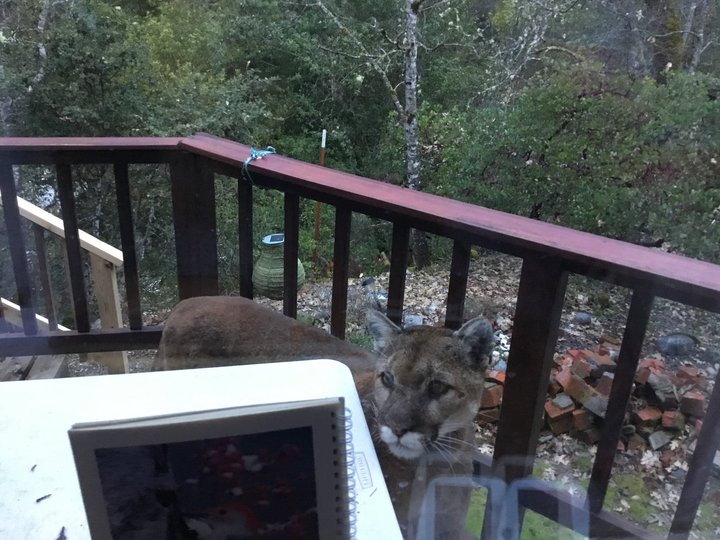 A mountain lion startled residents in the Pearch Creek area of Orleans this morning after the wild cat was reportedly heard banging on a home’s kitchen window.

Resident Deborah Hostler told the Outpost this afternoon that she took several photos of the mountain lion on her porch during the incident.

Principal Investigator of the Hoopa Mountain Lion Project and Co-Director of Integral Ecology Research Center Greta Wengert told the Outpost this afternoon that the cat has been identified as the tracked mountain lion M2, and that she is looking into the situation in conjunction with Hoopa Tribal Forestry.

“[M2 has] a large territory,” Wengert said. “It skirts the wilderness. He is typically a remote forest cat, but the Orleans area is definitely within his normal home range so it’s not necessarily a surprise he’s down there. Male lions have incredibly large home ranges; between 100 to 200 square miles.”

Orleans resident Deborah Hostler told the Outpost that a Hoopa Forestry mountain lion biologist was at her home attempting to track down the cat this morning, saying the biologist was concerned the mountain lion might have health issues. However, Wengert said very little information is available at this time.

“This is the first time this animal has been close to residences, but that doesn’t necessarily mean that it’s unhealthy or injured,” she said. “Cats sometimes change their behavior based on weather and accessibility to hunting grounds. It could be as simple as that.”

Wengert said that if M2 remains in the area, the California Department of Fish and Wildlife will make the decision whether or not to relocate the cat.

“We’re in the observational period so to speak,” Wengert said. “We’re communicating with the department of fish and wildlife and law enforcement to determine if there are next steps that need to be taken.”

Wengert gave some advice for anyone who may come in contact with the mountain lion.

“Get to a safe place to protect yourself, make yourself look as large as possible, make loud noises,” she said. “Also, do your best not to appear afraid. Don’t run away fast. Back away.”