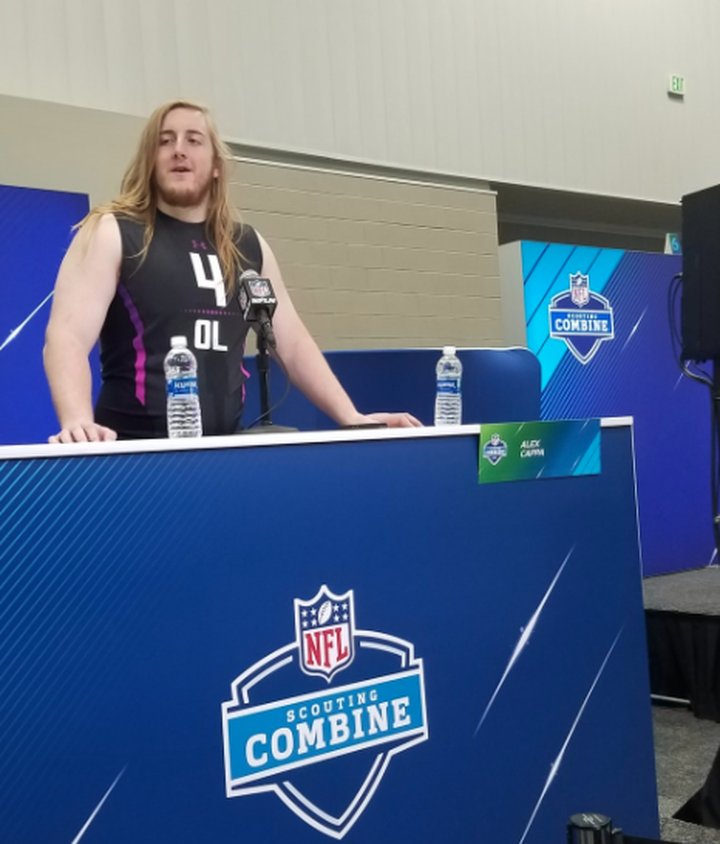 Former Humboldt State lineman Alex Cappa went through the bulk of his drills at the NFL Scouting Combine today, impressing most analysts and likely raising his draft stock.

Today Cappa competed in the on-field portion of his combine drills at Lucas Oil Stadium in Indiana — home of the Indianapolis Colts.

Cappa posted the following performances during his combine drills:

Cappa wasn’t the most athletic lineman in the measured competitions, running the 10th worst 40-yard dash time and scoring the 6th worst broad jump. The 6-foot-6-inch lineman did hold his own during yesterday’s bench press drill though, landing in the middle of the pack by lifting 225 pounds 24 times.

But Cappa’s biggest performances came during the on-field workouts, where he proved once again that he’s a big mountain of a man who can manhandle his competitors (see video below).

A bit of drama affected his position as an offensive tackle yesterday, when an official NFL measurement showed his arms to be 32 and 5/8 inches long, shorter than the 33 and 1/8 inches previously reported. As a result, draft analysts are reporting that he will likely be drafted as a guard, switching him to the inside of the offensive line.

“With Alex Cappa having 32 5/8” arms he’ll be moved inside to guard in the NFL,” NFL scout Greg Gabriel wrote on Twitter. “Can’t play outside with short arms. Clubs want 33” minimum and prefer longer for OT’s.”

With Alex Cappa having 32 5/8” arms he’ll be moved inside to guard in the NFL. Can’t play outside with short arms. Clubs want 33” minimum and prefer longer for OT’s

Cappa also met with the press yesterday, giving Humboldt State University a shoutout in the process.

“I’m here to show I can play with anybody,” Cappa told the press. “Humboldt State was my only offer coming out of high school. It’s cool, it definitely gives you a different perspective and a different appreciation. It’s not something people really expect you to do coming out of a place like that so it gives you a chip on your shoulder. Before getting recruited to Humboldt, I had never heard of it but I’m glad I went there now.”

Guy who has a chance to make a lot of money at the NFL Combine based on performance: Offensive Lineman Alex Cappa (6-7, 305) who will be the first player picked from Humboldt State in 27 years. pic.twitter.com/dnIgFAnP1I

Alex Cappa is not a fluid athlete, but we knew that coming in.Gave great effort, confirmed that he should be a worthy top 120 pick at OG.