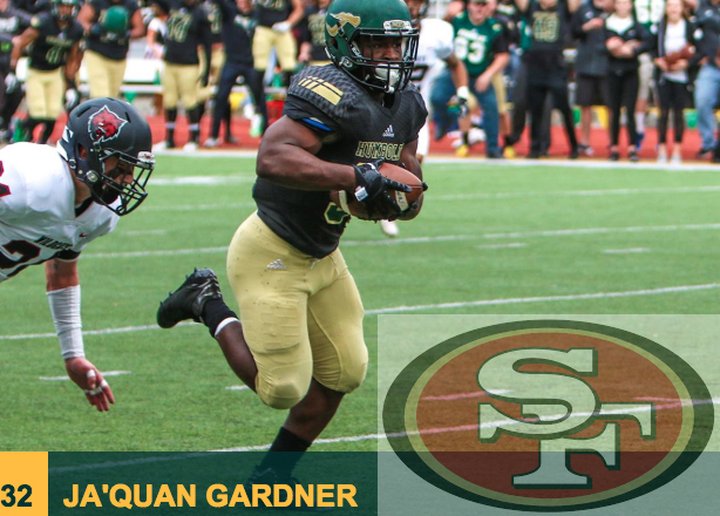 Running back Ja’Quan Gardner concluded his college football career last fall, but the All-American from Humboldt State is still chasing his dream. The Ceres, Calif., native will be joining the San Francisco 49ers as they begin minicamp this weekend.

Gardner left the North Coast with all of the program’s rushing records and a haul of conference, regional and national awards in tow. The running back returned home following his senior campaign and has been preparing to make the most of whatever comes next.

He spent the winter and spring working out with Coach Bon Su at Bon Su Elite Athletics in his hometown. Gardner trained for his Pro Day opportunity held on the UC Davis campus on April 4.

“To prepare for the pro day, we worked on the 40-yard dash, shuttle runs, bench press, vertical jump,” explained Gardner. “We were working on catching the football and on routes.”

His hard work paid off, and he and his agent had conversations with teams leading up to and after the NFL Draft. Gardner didn’t expect to hear his name called during the three-day event hosted in Dallas, but he knew that, if he was patient, teams would give him a chance to prove himself.

“Every kid that plays football wants to hear their name called, but I had realistic expectations for the draft,” said Gardner. “I was focused on after the draft to see where I could land.”

Monday the post-draft chatter picked up and the 49ers called the running back with an offer. He accepted the chance and will suit up in Scarlet and Gold for this weekend’s rookie minicamp. Gardner says he has been receiving lots of tips about how to make the most of his NFL opportunity, including advice from former Lumberjack Lyndon Rowells. Rowells spent time with the Carolina Panthers and the Calgary Stampeders of the Canadian Football League.

“I am optimistic and confident in my game,” said Gardner. “I just really want to get out and show the 49ers what I can do.”

The advice included showing a willingness to play special teams and to not lose sight of what it took to get him there – playing football and having fun.

What will Gardner remember most about his Humboldt State football experience?

“The friends that I have played with over the years,” said Gardner. “I came in with a group of guys that I will never forget. I appreciate every single one of them. They made my career a lot easier. It was just great.”

He also had a message for Green and Gold fans.
“I just want to thank the fans for their support the last four years,” said Gardner. “They made my career a great experience. The Redwood Bowl is the best stadium in Division II.”