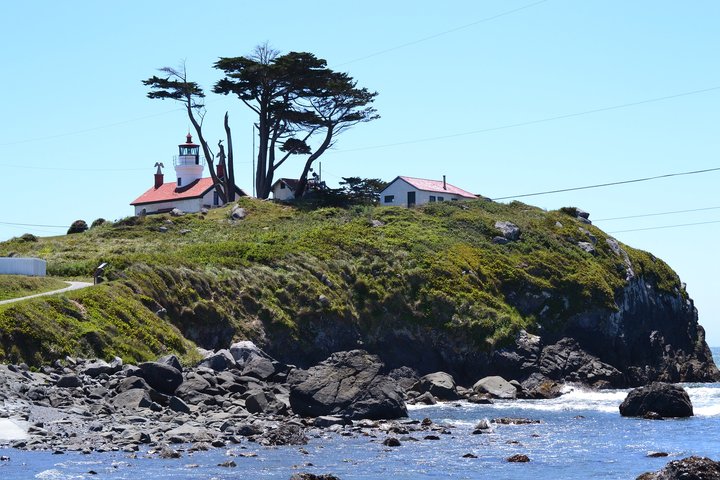 Not all heroes wear capes or uniforms!

The Del Norte County Sheriff’s Office would like to offer a sincere thank you to Brett Stone and some other local residents as they likely saved two lives earlier this week.

On Monday, about 1130 am, Brett was in the area of Pebble Beach near Preston Island when he heard screaming from near the water. He drove towards the sounds until he could no longer drive and then ran on foot over very rough and unsteady terrain. He was able to locate two people in peril, clinging to a rock bluff at the waters edge. They were unable to climb out of the water as the tide was surging. It was later learned that one of the individuals fell into the ocean and the second individual jumped in to provide rescue.

Brett located some fishermen in the immediate area that were using eel poles. He attached two of them together and extended them towards the two people stranded. One was able to climb out using the pole. Brett was then tossed some rope from a deputy a distance away. The deputy was on the other side of a fissure in the rocks and would have had an extended response time. It was obvious that seconds mattered.

Brett tied the rope around himself and handed the other end to people nearby. He jumped in the water and connected with the last remaining person in distress. It was then that Brett was “spent”. He held on to the subject needing help and mentally prepared for the fact that his head would likely be submerged while he was being pulled in. Both Brett and the second person were pulled in by local fishermen.
If not for the bravery, resourcefulness and disregard for his own exposure to danger that Brett displayed, this story could have ended much more tragically. A special thanks goes out to everyone that contributed to this rescue.

According to Brett, he was just in “the right place at the right time”. That’s totally something a hero would say.

The DNSO plans to recognize all of the folks that helped in a more formal way, but we had to share the story.

We are Del Norte Proud.