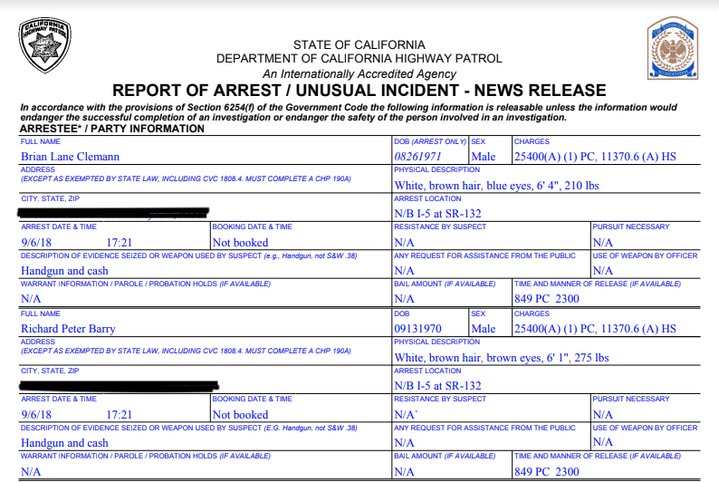 Two former Del Norte County California Highway Patrol Officers turned local, licensed marijuana distributors were arrested in Fresno earlier this month after officers found them to be in possession of more than $200,000 in cash and two concealed and loaded handguns.

According to a CHP press release, Eureka-based business owners Richard Barry and Brian Clemann of Wild Rivers Transport, LLC were driving northbound on Interstate 5, when, on two separate occasions in the same evening, a Central Division CHP officer pulled over their Chevy pickup for vehicle code violations. During the second stop, the officer requested backup and searched the men’s truck, finding the guns and bags of cash.

“Based on the firearms, currency and contradicting statements, the officers placed the two subjects into custody and transported them to the Merced Area CHP office,” the CHP press release reads. “Task force officers were then requested and responded to handle the investigation of the two subjects. The two subjects were then released and the case will be submitted to the Stanislaus County District Attorney’s Office.”

After the incident, Barry and Clemann issued a press release on behalf of their company saying that they were legally transporting money from Los Angeles to Humboldt County for their clients when the CHP seized the cash and turned it over to the Department of Homeland Security.

The two men also state that CHP officers verbally harassed them while they were detained for more than six hours, saying they looked like “dirtbags,” and that if they “were illegals” they “would not be going anywhere.”

“It appears the CHP will stop at nothing to disrupt the lawful and legal transport of items involved in the medicinal cannabis industry,” Barry and Clemann stated in the press release. “Despite following all [Bureau of Cannabis Control] rules and regulations, the CHP endangered, harassed, detained/arrested, and mistreated individuals engaged in lawful activities as they relate to cannabis.”

The Del Norte Triplicate reports that Clemann has previously stood trial for allegedly breaking into and burglarizing an evidence trailer while working for the Del Norte County CHP, of which he was found not guilty. The jury was also unable to reach a decision on 13 additional charges that included receiving stolen property, destruction of records and meth possession.

Clemann’s lawyer Matthew Kumin told the Outpost that despite the lack of a conviction, Clemann was fired for insubordination because he took his lawyer’s advice and didn’t talk to his superior officers about the case during the investigation.

Kumin said that Barry also previously worked for the Del Norte CHP, but resigned after admitting guilt in a drug-related incident.

Kumin said that no criminal charges have officially been brought against Barry or Clemann by the Fresno County District Attorney’s Office at this time, and that he is actively working to get the money returned.

Read more from the CHP below:

On September 6, 2018, at approximately 1520 hours, a CHP Central Division canine officer was on patrol traveling northbound on Interstate 5 in Fresno County and made an enforcement stop on a 2007 white Chevrolet pickup for a vehicle code violation. During the course of the enforcement stop, the two male occupants of the Chevrolet identified themselves as retired peace officers.

The officer issued the driver of the Chevrolet a written warning for the observed violation. The officer again observed the 2007 Chevrolet pickup northbound Interstate 5 in Stanislaus County at approximately 1720 hours, and observed another vehicle code violation and initiated an enforcement stop.

A second officer was requested and during the course of the enforcement stop, the officers located two loaded and concealed firearms along with two bags containing currency. Based on the firearms, currency and contradicting statements, the officers placed the two subjects into custody and transported them to the Merced Area CHP office. Task force officers were then requested and responded to handle the investigation of the two subjects. The two subjects were then released and the case will be submitted to the Stanislaus County District Attorney’s Office.