Photos by Ray Hamill/HumboldtSports.com – Eureka’s Kellina Pratton looks to set up a play against St. Bernard’s earlier this week.

A minor shake-up in the North Coast Section rankings and the projected playoff seedings this week has added to the importance of Friday night’s Dick Niclai championship game in girls basketball.

Big 5 champions Del Norte will face off against Eureka at HSU’s Lumberjack Arena at 6 p.m. in the tournament decider, in what will be the third showdown between the two teams this season.

This time, however, there’s arguably more at stake than in either of the two previous meetings, both won by Del Norte, and we’re not talking just about a tournament championship.

On Thursday, the Del Norte girls dropped from No. 1 to No. 2 in the MaxPreps Division-IV NCS rankings, leaving them in jeopardy of not getting the top seed for the section playoffs.

A win on Friday night over the Division-III Loggers might be enough to catapult them back to the top spot, currently held by St. Patrick/St. Vincent.

Del Norte’s Bella Stone passes the ball under the watchful eye of head coach Justin Clifton during a recent game.

The Eureka girls, meanwhile, are currently ranked No. 4 in Division III and neck and neck in ranking points with No. 3 St. Joseph Notre Dame, which has no game this weekend.

A win over a highly-ranked Del Norte team would likely see Eureka sneak the No. 3 seed for the postseason.

And that would be huge, because it means the Loggers would avoid No. 1 seed Salesian before a potential championship game, providing they get that far.

Salesian is currently the No. 1 Division-III team in California and No. 26 overall in the entire nation and a certainty to earn the top seed.

The top two teams in the section bracket both move on to the NorCal tournament, so the difference between a third and fourth seed in the bracket (and avoiding Salesian before the NCS championship) could prove to be a huge difference maker moving forward. 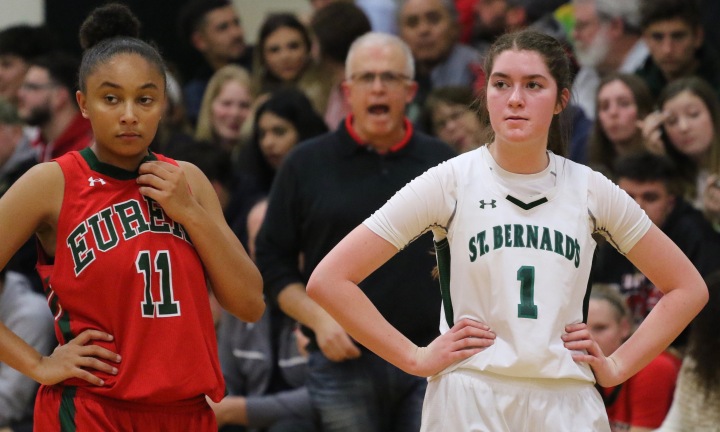 Del Norte, on the other hand, will be hoping to regain the top seed with a win over the Loggers, coupled with a St.Patrick/St. Vincent loss in its finale against Salesian on Saturday.

The Warriors dropped a spot this week despite winning big over Hoopa Valley in the Niclai semifinal on Wednesday, their sixth consecutive win.

Del Norte, in fact, has won 16 of its past 17 games, with the only blemish in that spell an overtime loss to South Medford, the No. 4 team in Oregon.

Playing a lower-ranked Hoopa team at this stage of the season did not help the Warriors.

The difference between a No. 1 or 2 seed could be huge, especially when home court advantage is taken into consideration and teams have to travel all the way to Crescent City.

Friday night’s game will be played as part of a doubleheader along with the boys championship between Fortuna and Del Norte at 7:30 p.m.