« Huskies Pull Away From Panthers in the Second Half

Both Fortuna and Hoopa Valley remained perfect in league play with impressive wins in boys basketball on Tuesday night, while two others did their best to keep pace.

Fortuna senior Zac Claus lifted his team to a big second half as the Huskies blew open a tight game in the third quarter on the way to an 86-66 win at McKinleyville.

Right behind them, the Del Norte Warriors kept pace with a comfortable 59-43 win at Eureka, improving to 3-1 at the halfway stage of league play.

In the Little 4, the Hoopa Valley Warriors improved to 3-0 with a 70-58 win at St. Bernard’s, while South Fork bounced back from a weekend loss to beat Ferndale 69-53. 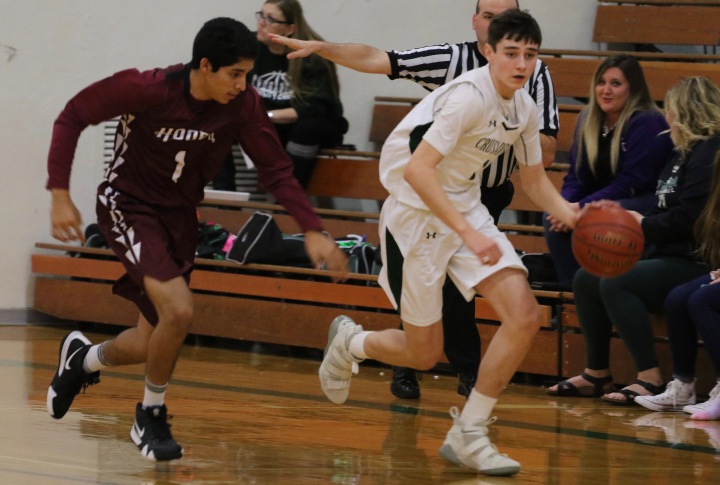 The visiting Warriors ran out to a big early advantage and were able to hold on for the win.

“I was happy. I thought we brought good energy,” Hoopa head coach Tyler Mitchell said. “They made a little run and we held our composure and were able to finish it out.”

The Warriors, who improved to 16-6, made it three league wins in just six days, beating all three league opponents by double digits and by an average margin of almost 16 points.

The Crusaders struggled to find their rhythm early and trailed 17-3 after the opening quarter, before waking up.

They outscored the visitors 55-53 the remainder of the way.

“The boys did an outstanding job and put forth a great effort,” St. Bernard’s head coach Steve Thrap said. “Our goal at this point is to try to find our identity again, and tonight was a great step in moving forward on that.

“Very proud of every single one of the kids.”

Tristin Campbell also had a big game off the bench.

“He made some good cuts and kind of held it together for us in the second quarter,” Mitchell said of Campbell. “He helped us bring some energy off the bench.

Ethan Price scored a game-high 16 points to lead the Warriors to a comfortable road win at Eureka.

Judah Robinson added 12 points in the win and Omar Banuelos 11 as the Warriors improved to 3-1 in the Big 5, remaining just one win behind leaders Fortuna.

Cahliel Garner and Trevor Bell each finished with eight points for Eureka, which lost for the first time in three games and dropped to 1-3 in the Big 5 and 4-11 overall.

Eureka hosts Fortuna on Thursday night, while Del Norte has a bye.

The Cubs responded from a tough loss at Hoopa Valley over the weekend with a 16-point win, their second over the Cats this season.

Each of them finished with four 3-pointers, as the Cubs made good on 12 of their 30 attempts from downtown.

The Cubs host Hoopa on Friday in a game that will likely decide the league championship.

Huskies Pull Away From Panthers in the Second Half