« Jeff Tsarnas Pleads Not Guilty to Fernbridge Hit-and-Run, Will Be Represented by Same Attorney as Marci Kitchen

Local girls wrestling will enjoy a couple of historic firsts this week, showcasing just far the sport has evolved in recent times.

On Thursday night, the Humboldt-Del Norte League will hold a first-ever girls dual meet, with Eureka traveling to Crescent City for a showdown with Del Norte, and on Saturday the Loggers will host a first-ever all-girls North Coast Classic at Eureka High, with close to 100 girls expected to participate.

With a growing number of participants at several local high schools, the H-DNL will also host a first-ever league championships for the girls this season, finally giving the competitors a chance to win a coveted White Star.

“In the past I’ve had girls placing fourth in state but couldn’t get an H-DN star,” Wilson said.. “Now we’re sanctioned. This is the first year that’s going to happen.”

The North Coast Classic will feature tournaments for boys varsity, JV and girls, with all the local programs scheduled to compete, among a deep pool of visiting teams.

“We’re expecting about 10-to-15 schools (for the girls), but we’ve got 25 on the boys side, so it’s a big tournament,” Wilson said. “A lot of teams are coming to this tournament because we have all three levels, so they can come in and get four or five matches, and that’s not always the case.

“We’re going to have some good competition.”

The Loggers have the most established local girls team, bringing 13 wrestlers to Thursday’s historic dual meet, with Del Norte filling eight of the 14 classes.

Other schools too, like McKinleyville, Fortuna and Arcata, all feature girls in their programs.

And the future looks even brighter for the sport  in the H-DNL.

“What I like about it is that we’re not just wrestling, we’re competing now,” Wilson said. “The big goal is sustainability.”

With a growing number of local wrestlers at the youth level, that shouldn’t be a problem.

“I’ve got seven girls coming out of Zane and Winship with two or three years experience joining us next year,” Wilson said.

The opportunities for those young wrestlers also continue to grow beyond high school.

“There are 35 West Coast schools that now have girls wrestling programs at the collegiate level,” the Eureka head coach said.

Two local competitors, Arcata’s Maeve Moore and McKinleyville’s Audriana Beattie, have each already signed a letter of intent to wrestle in college next season.

Eureka’s Aracely Rendon, a junior, looks well positioned to do the same a year from now.

They’ll follow in the footsteps of former Logger Marie Seely, who wrestles for South Western Oregon CC and has been making an impact at the collegiate level since graduating Eureka High in 2017.

“She’s just represented Humboldt County very well,” Wilson said. “She’s one of the most accomplished wrestlers here in the past five years. She could go to a four-year school anywhere in the U.S. and wrestle.”

For a more in-depth preview of Saturday’s tournament, log on to Humboldt Sports on Friday. 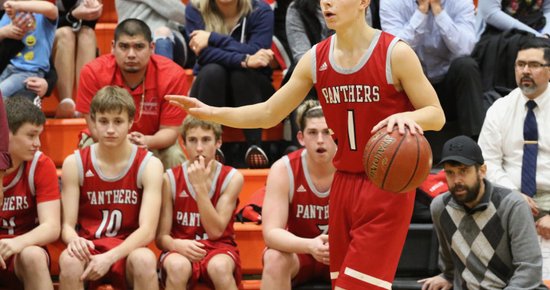 Panthers Answer the Call in Key Showdown at Arcata

No Joy for Corsairs at Feather River

Prep Roundup — Huskies, Crusaders Pull Away in the Third Quarter