Tyce Mullins continues to receive recognition from outside the area after being named this week to the Prep2Prep all-North Coast Section football team.

Mullins, who is coming off an outstanding season for the Eureka Loggers, was one of four first-team linebackers honored on a roster dominated by De La Salle and Liberty players.

The Eureka senior, who was earlier named the Big 4 Defensive Player of the Year as well as the Humboldt Sports Player of the Year, helped lead the Loggers to a second straight undefeated season, while anchoring a dominating defense that allowed just one opponent come within 20 points of them.

Mullins was included in the first-team linebacking corps alongside Del La Salle’s Henry To’oto’o, the NCS player of the year, as well as San Ramon Valley’s Tristan Sinclair and Liberty’s Nicholas Einess, all seniors.

And he wasn’t the only Logger honored.

Mullins’ teammate Isaak Gutierrez was included on the all-NCS second-team defensive line, with Prep2Prep giving him credit for an outstanding season on the offensive line as well.

Two other Eureka players were also included as third-team selections.

Junior Miles Meynell was named to the third-team defensive line, while senior Cruz Montana was named third-team quarterback, getting edged out only by Liberty’s Jay Butterfield on the first team, and Cardinal Newman’s Jackson Pavitt on the second team, both of whom are juniors.

St. Bernard’s Connor Chase (offensive line) and Will Omey (utility), as well as Fortuna’s Sheaden Kadle (defensive line) were each also named to the third team. 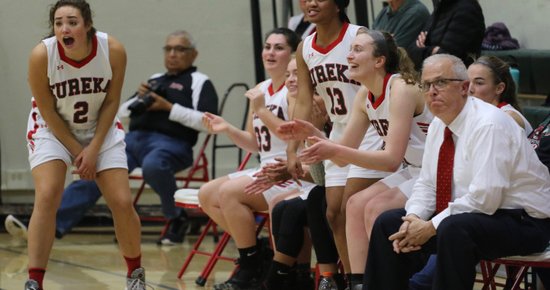