Photo by Mark Gorge – The Northern Humboldt Giants in Yountville on Friday.

It was a nervy finish, but the Eureka Eagles 17U got their state championship challenge off to a winning start with a 5-4 victory over the Pomona Diamond Cats in Yountville on Friday.

Leading by five runs heading into the bottom of the seventh inning, the Eagles had to withstand a late Cats rally before holding on for the all-important win to open the four-team double-elimination American Legion state tournament.

Earlier in the day, the Northern Humboldt Giants were not so fortunate, dropping their opener to Chino Post 299 by a score of 12-1.

At the plate, Zac Anderson paced the Eagles with a pair of base hits, including a double, while Morris added a double.

Both players scored and drove in a run.

Bode Joyner also had a base hit and an RBI, while Ethan Pesch was 1-for-3 with a stolen base.

The Eagles ran the bases well, with Bode, Jenner Christiansen and Lane Thrap each also stealing a base.

The Eagles will now play Chino at 9 a.m. on Saturday.

The Giants gave up six runs in the third inning and trailed 12-0 after four in their opening game at the state tournament.

Northern Humboldt managed just three hits for the game, one each by Vincent Agliolo, Jared Dixon and Jake Reeser.

Will Mager took the loss on the mound, allowing seven hits in three innings, with Alex Gorge and Cayden Lee pitching in relief.

The Giants will try to keep their season alive and battle back through the losers’ bracket when they play the Cats on Saturday at noon. 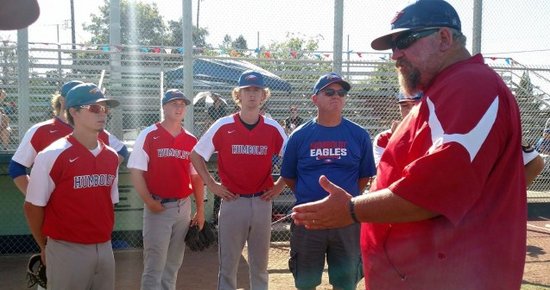