MONDAYS WITH MICHAELE: We Slide Now! »

The Humboldt Eagles 19U are headed to the American Legion state tournament.

The Eagles did it the hard way, but secured their passage to Yountville with a second straight win in the losers’ bracket of the Area One Tournament in Woodland on Sunday, rallying from an early deficit to top Chico 6-1.

The win, coupled with a Petaluma victory over Fairfield on Sunday evening, leaves the Eagles as one of the two remaining teams at the double-elimination tournament, which guarantees them a place in next week’s state tournament.

The Eagles will now play Petaluma for the Area One championship, but will need to win twice, whereas Petaluma needs just one win to secure the title.

Cameron Saso got the win against Chico with another solid performance on the mound, striking out four in six innings and allowing just the one run.

“Cameron Saso, the Big 5 MVP pitcher, was brilliant again,” Eagles head coach Matt Tomlin said. “He didn’t even have hist best stuff. He just wins because he competes. That’s what’s special about him. He’s a winner. Cameron Saso is a winner.”

Chico had chances early on, but Saso and the Eagles defense got out of a bases-loaded situation in the bottom of the second.

They weren’t so lucky in the third, however, with Chico getting the breakthrough to take the lead, but again leaving a pair of runners stranded.

The Eagles came alive offensively in the fifth, when a Cody Emmons base hit drove in a pair of runs to give his team a 2-1 lead.

They would not trail again.

Kalebh Hill got the rally started with a pivotal lead-off base hit, on his way to scoring the tying run.

The Eagles pulled away with four more runs in the top of the seventh, before Garrison Finck came in to close out the game on the mound and quickly took care of business.

Caleb Ruiz in center field and Jaden Gorge in the infield each had big games defensively for the Eagles.

“Jaden Gorge has been amazing for us defensively, and more than anyone on our team we play him at multiple positions,” Tomlin said of the Arcata graduate who turned a big double play at third base. “He just always finds a way to do positive things to help us.”

Gannon Cyphers continued his impressive summer at the plate with two more hits in the win, while Ruiz was 1-for-3 with an RBI.

The Eagles will play Petaluma for a chance at the Area One Tournament championship on Monday. 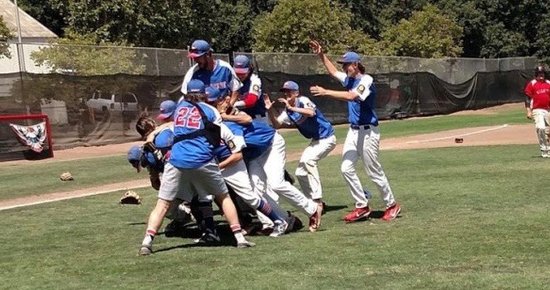