Photos by Mark Gorge – The Eureka Eagles celebrate their state championship in Yountville on Sunday.

On what was a proud day for Humboldt County baseball, the Eureka Eagles were crowned American Legion state champions on Sunday.

The Eureka 17U team saved its best for last, marching through the state tournament in Yountville with a perfect 3-0 record.

And they had to overcome an old rival along the way, defeating the Northern Humboldt Giants 7-3 in an all-Humboldt championship game.

The Eagles took control of the game early, scoring four times in the bottom of the third to open up a 6-0 lead, and that would turn out to be enough despite a late rally by the Giants.

Photos by Mark Gorge – Friends and neighbors, the Eagles and Giants pose together for a photo at the all-Humboldt state championship game.

Bode Joyner got the win on the mound, pitching five and two-third innings, allowing four runs on four hits and seven walks.

Keenan Morris pitched the final inning and a third for the save, allowing two hits and holding the Giants scoreless.

Joyner also had a big day at the plate, finishing 2-for-3 with two RBIs, while Zac Anderson was 2-for-2.

The Giants, however, showed their resolve once again in defeat.

With just nine players on their tournament roster, they battled all the way, as they have all season.

The Giants came into the game having gone a combined 7-1 in elimination games over the past three weekends, including a dramatic District championship win over the Eagles in Fortuna two weeks ago.

They had to battle back again this weekend, winning a pair of games in the losers’ bracket on Saturday after an opening-day loss on Friday.

Trailing in Sunday’s game, the Giants again refused to go down easily, scoring four late runs to pull within two and give themselves a chance at the end.

The Eagles, however, would not be denied, learning from their collapse at the District tournament two weeks ago, when they saw the championship slip away with back-to-back losses to the Giants.

Since then they have gone unbeaten on the way to Area and State titles.

At the plate for the Giants, Cayden Lee and Alex Gorge each closed out very impressive summers with a pair of hits, including a double by Gorge.

Both players will be sophomores next year and both appear ready to step into bigger roles.

Lee also pitched in relief of starter Kaden Ritter, who took the loss. 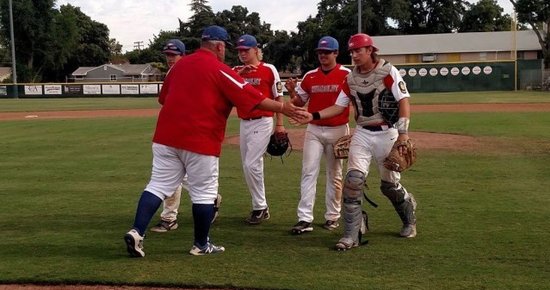