Meet Your New California State Budget! Lots of Spending on Health Care, Education, Housing and the Working Poor; Not as Many New Taxes as Some Had Feared »

Eagles 17U Continue to Roll Against 76ers

File photo – Keenan Morris, left, and Bode Joyner have each impressed this summer for the Humboldt Eagles.

Hayden Bode finished 2-for-3 with a home run and two RBIs as the Humboldt Eagles 17U continued to roll in American Legion baseball on Wednesday, defeating the Southern Humboldt 76ers 12-2 in five innings at Crusader Field.

Bode led a balanced team performance with several players contributing for the Eagles, who improved to 7-3.

Lane Thrap was 2-for-2 in the win with a pair of RBIs, while Nick Dugan finished 1-for-2 with two RBIs.

Keenan Morris, Curtis Edge, Ben Tehan and Parker Rodgers each also had a base hit for the Eagles.

Morris got the win on the mound, tossing 2.2 innings, while Ethan Pesch also impressed, pitching 2.1 innings and striking out three.

For the 76ers, Wyatt Wilson, Regan Nyberg and Aaron Head-Mason each finished with a hit, with Wilson also driving in a pair of runs. 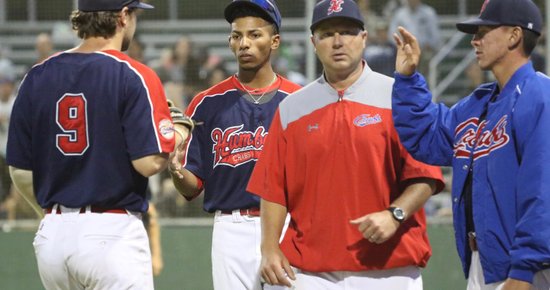 Local Players Continue to Impress as Crabs Prepare for the Blues