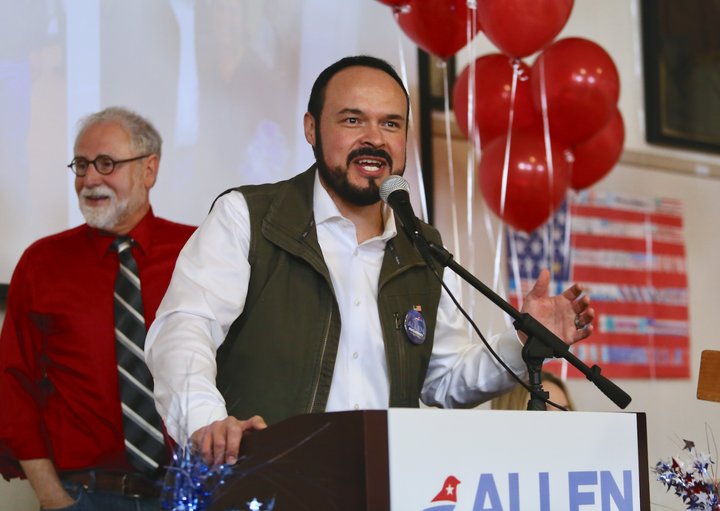 It’s a full year until residents of Humboldt’s First District head to the polls for the March 2020 primary that will likely decide who will serve as their supervisor for the next four years. But inside Ferndale’s Veterans’ Memorial Building on Saturday there were balloons, a shrimp platter, ready-for-pick-up yard signs and a couple dozen supporters all gathered to launch progressive activist Allen McCloskey’s ambitious supervisorial campaign.

The event kicked off with speeches from several McCloskey supporters who spoke of his successes as a union leader and community organizer (you can watch the entirety of the event in the video at the bottom of this post). When it was time for the candidate to speak he expressed gratitude to those in attendance before laying out some of the reasons he chose to run.

“Thank each and every one of you for being here to stand in solidarity with what we are trying to do which is reset the tone of democracy here in our county, to take our county government back from wealthy developers, wealthy landowners, corporate cannabis and other special interests that have bought and are now bossing our elected officials,” McCloskey said.

Candidate McCloskey faces an uphill battle. He faces a popular incumbent in Supervisor Rex Bohn in arguably Humboldt County’s most conservative district. Back in the June 2012 primary Bohn stomped two other competitors by garnering 65 percent of the vote in his district. In 2016 no one else even bothered to run. Despite the steep odds, local activist Renee Saucedo was overflowing with confidence about McCloskey’s chances during her speech Saturday.

“I say this for you, Allen, because you have a long road ahead of you, but me and my family will stand and walk with you through it. Your opponent is shitting in his pants!” Saucedo said.

Watch McCloskey’s campaign launch in its entirety below.