« Tigers Rally Late to Set Up NCS Showdown With Mack

Resilient Panthers Come Through in the Clutch Yet Again

There simply is no denying the McKinleyville Panthers, who now sit on the cusp of a season that will be difficult to top.

On Friday, the Mack boys left it late, as they have on occasion this season, but never faltered in their determination, scoring twice in the bottom of the seventh to seal a thrilling 2-1 win over visiting Fort Bragg.

The victory sends them back to the North Coast Section Division-IV championship game for the first time since 2011.

The Panthers, who remarkably have just three losses all season, fewer than any other Big 5 team in a single season in the past 15 years, will join the school’s softball team in playing for a section crown next week.

An NCS double for the Panthers would be the first ever for a Big 5 school.

There were many heroes for the Panthers, who will play arch rivals Arcata in Wednesday’s championship game at the Arcata Ball Park, none more so than sophomore Corbin Eichin.

Eichin pitched an outstanding game, allowing just three hits and one walk in seven innings, while also providing the late dramatics at the plate, driving in Chase Fisher on a sac fly for the walk-off run.

“What can you say about Corbin Eichin?” St. John said. “Just one earned run today, and how many big games has this guy pitched for us? And he had the game-winning RBI.”

The late dramatics began when Lance Lally reached base on an error, and he scored moments later on an Isaac Puzz RBI single to right field to tie the game.

Puzz, known more for his exploits on the basketball courts, has been a revelation on the diamond this spring, and in particular at the plate in key situations.

“Ike Puzz has been coming up clutch for us all year,” the head coach said.

Fisher reached base late on a perfect bunt single, before being advanced on Puzz’s base hit and then scoring on Eichin’s walk-off sacrifice.

“Corbin hit the ball well all game, he just hit it right at people, so we felt real good about him coming up,” St. John said.

More importantly, he did enough on the mound to keep his team in the game throughout and give his teammates a chance to get going at the plate.

“Corbin kept us in the game,” the head coach added. “They had a couple of opportunities to add on to their lead, but he kept them there, and that was huge to keep it at 1-0.”

The late heroics are nothing new for a Mack team that has come up clutch on numerous occasions this season and is now 22-3.

And similar to Wednesday’s NCS quarterfinal win over Redwood Christian, it was the bottom of the order that came through when it mattered.

“They did it again,” the coach said. “They started that rally in the seventh.”

Dustin Ireland led the way at the plate for the home team, finishing 2-for-3, with Puzz, Fisher and Kyler Carr each also finishing with a hit.

Wednesday’s game against Arcata will be the fifth between the two Big 5 rivals this season, with the Panthers having won three of the previous four.

“All the games with them have been real tough, and we’re not expecting anything less this time,” St. John said. 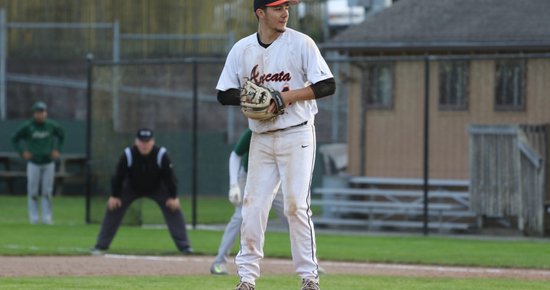 Tigers Rally Late to Set Up NCS Showdown With Mack