« (UPDATE) The Sheriff’s Office Chased Down a Wanted SoHum Man This Afternoon, but He Seems to Have Once Again Fled Into the Brush

(UPDATE) Carlotta Woman Reportedly Jumps From Truck During Argument on Highway 101 On-Ramp, Suffers Major Injuries From Being Run Over By Rear Wheels 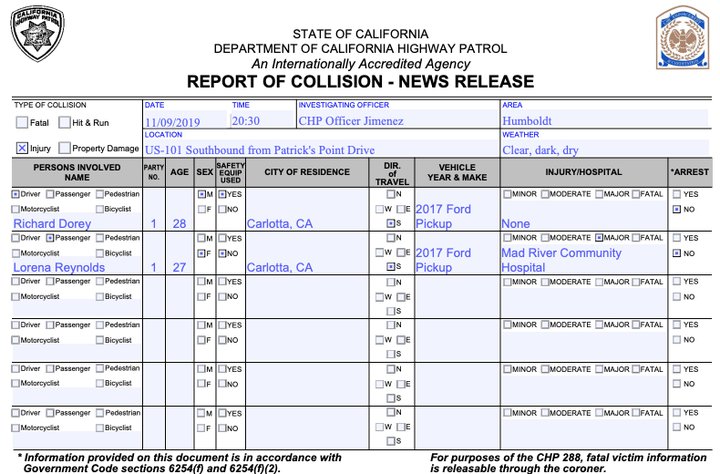 On November 9, 2019 at approximately 8:30 p.m., CHP Humboldt Communications Center (HCC) received a call of a collision on the the Patrick’s Point Drive on-ramp to southbound Highway 101.

The reporting party, 28-year-old Richard Dorey of Carlotta, stated a passenger jumped from the vehicle he was driving and was subsequently run over.

Officers and emergency medical personnel responded to the scene and located 27-year-old Lorena Reynolds of Carlotta, suffering from major injuries.

A preliminary investigation by CHP officers determined that the couple was involved in a verbal argument when Ms. Reynolds opened the passenger door and jumped from the vehicle.

Ms. Reynolds was subsequently run over by the rear wheels of the vehicle she had jumped from and suffered major injuries. Ms. Reynolds was transported to Mad River Community Hospital for treatment of her injuries.

No other vehicles or persons were involved in this incident. Drug and/or alcohol impairment are not considered to be a factor in this collision.

The CHP Humboldt Area Office is continuing its investigation and asks anyone who may have information to call 707-268-2000 or send an email to humboldt_area.humboldt_area@chp.ca.gov.

PREVIOUSLY: Woman Suffers Major Injuries After Jumping Out of Vehicle on Highway 101 Near Patrick’s Point