« Has This Man Offered You a Foot Massage? EPD Seeking People Who May Haver Been Contacted by Recent Sexual Assault Arrestee

Del Norte Too Strong for St. Bernard’s in Big 4 Opener

Everything went according to plan for the Del Norte Warriors on Friday night, as they got the Big 4 off to a winning start, defeating St. Bernard’s 27-20 in Crescent City.

In truth, the game wasn’t as close as the final score would suggest, with the home team opening up a 27-6 lead in the third quarter on a 44-yard Kobe Mitchell TD run.

Mitchell led the way, finishing with 150 yards on the ground.

Quarterback OJ Calleja also had a big night, scoring a pair of TDs, the first on one-yard run and the second on a trick play on a fourth-and-nine pass from Chase Blackburn from 19 yards out.

Gio Gonzales also found the end zone on a 15-yard TD run midway through the second quarter, his fifth touchdown of the season.

Defensively, the Warriors controlled the tempo of the game, holding the St. Bernard’s big playmakers in check.

“Our game plan worked out on both sides of the ball,” Del Norte head coach Nick White said. “In terms of controlling the ball on offense and controlling possession, and defensively we wanted to take away (Lane) Thrap and (Justin) Hagler.”

“Our offensive line really played well in muddy, rainy conditions,” White said. “That ball control was huge, and we didn’t have any turnovers offensively.”

On the other side of the ball, the Warriors played as a unit.

“Defensively, overall we played really well as a group,” the head coach said. “Every kid did their job, their assignment.”

For St. Bernard’s, it’s a game many feel the smallest school in the Humboldt-del Norte League should not have to play, and that the Crusaders should be included in the Little 4, a league they dominated for four years before getting moved up to bigger schools league last year.

The out-matched Crusaders were dominated physically along the line against the bigger school.

Head coach Matt Tomlin, however, was more than happy with how his players performed.

“I leave here with my head held high,” he said. “And I’m so proud of my kids.

“I’m proud of the way they stood in there and fought.”

The switch to the Big 4 remains a controversial move.

“I know there are some people sitting at home celebrating that this happened,” the coach added. “When you’re out-weighed on the offensive line by 60 to 80 pounds, that’s tough.

“But I’m going to look at the bright spots. My kids played so hard.”

Will Omey opened the scoring for St. Bernard’s on a one-yard TD run to tie the game at 6-6 late in the first quarter.

Omey also threw for a pair of second-half TDs, the first on a hook and ladder play that also involved Bode Joyner and Thrap, the latter of whom found the end zone.

Omey capped the scoring on a nine-yard touchdown pass to Logan Petrusha in the dying seconds, but Del Norte was able to recover the ensuing onside kick to seal the win.

Afterwards, Tomlin praised White for the job he’s doing in his first year as head coach, along with his brother, assistant coach Chris White.

“Del Norte is so well coached,” Tomlin said.  “The White brothers are doing an outstanding job up there.” 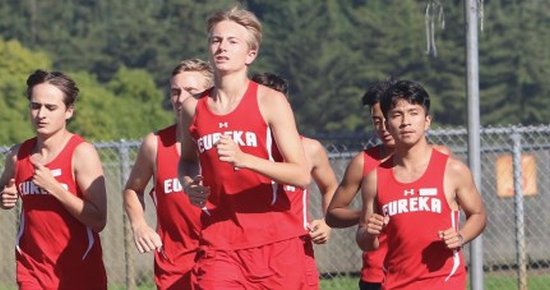