Photos by Ray Hamill/HumboldtSports.com – The Arcata Tigers edged out South Fork 1-0 on Wednesday.

Fortuna’s Sarah Killfoil scored four goals in a 5-0 win at Del Norte on Wednesday, leading the Huskies to a third win in three league matchups as they try to keep pace with Eureka.

In other games on Wednesday, the Eureka girls cruised to a 7-0 win at McKinleyville, while the Tigers got the better of the South Fork girls 12-0 at Arcata.

In boys’ action, McKinleyville scored three unanswered goals to come from behind and beat Eureka 4-3 in a thriller at Mack High.

The Arcata boys edged South Fork at home 1-0, and the Fortuna boys edged Del Norte on the road 1-0.

Killfoil was in sensational form for the Huskies, who broke open a tight game with four second-half goal.

“She was pretty phenomenal for us today,” Fortuna head coach Kathleen Lynch said. “She really stepped up.”

After netting off a free kick in the opening half, the Fortuna junior quickly secured her hat trick with two early second-half goals as the Huskies took control of the contest.

In her coach’s words, Killfoil gave her team the boost it needed after yet another slow start.

“We did a nice job maintaining possession for good portions of the game, but again we didn’t have the fastest start,” Lynch said. “But we kind of picked it up in the second half … it’s definitely something we’re looking to improve on.”

Sophia Villaivazo scored the other goal for the Huskies, who were impressive along the back line.

“Every single one of them was solid,” Lynch said of her defenders.

Junior Ava Leonardo also had a big game defensively in a player-marking role.

For Del Norte, Leslie Cerros had a good game defensively, as the home team frustrated the visitors in the opening half.

Wingers Jaden Ridgen and Vianna Vongphach both kept the Huskies defense on its toes with some smart passing.

The Tigers rolled to an easy win over the Cubs, improving to 2-1 in league play and quickly responding to Saturday’s loss to Eureka in emphatic fashion.

Co-Captains Zakiya Elloway and Bailey Cherms each netted a hat trick of goals in the win, while a pair of freshmen, Gabriela Davidson and Sophia Pulley, each scored their first high school goals.

Also on the scoresheet were sisters Michaela and Tildy Macdonald, Jocelyn Bliven and Gracie Townsend.

For South Fork, Lyndsee Brewer had another good game between the posts despite the final score, making nine saves for the short-handed Cubs, who were forced to play with just nine players late in the game.

“They just pass so well and they’re so in sync,” South Fork head coach Ann Constantino said of the Tigers. “Props to them. Patrick’s a great coach.”

Kylee Cotter also had a big game for the Cubs in defense, despite playing soccer for the first time ever this season.

Freshman Macy Yarbrough continued to be a bright spot for the Cubs in midfield, while senior Mirna Navarrete had a good game defensively.

The Cubs play at St. Bernard’s on Friday, while the Tigers host McKinleyville.

The home team pushed the Huskies all the way in Crescent City, with Lane Shelton’s second-half goal the only thing separating the two teams.

The Huskies were playing without Fernando Atilano, who injured his ankle on Sunday, and his absence was felt.

Atilano is game-to-game but could miss some time.

But even without him, the Huskies were able to come away with the win and keep their unbeaten start to the season in tact, improving to 4-0 in the H-DNL and 9-0 overall.

“It was definitely a battle,” Holmes said. “We had a lot of opportunities, we just couldn’t get it. But hat’s off to Del Norte, they played with heart.”

The Fortuna defense has allowed just one goal in four league games and has posted shutouts in six of nine games.

“It was a shutout so credit to the back line,” Holmes said.

Arthur Frye scored the only goal of the game in the second half as the Arcata Tigers barely got the better of visiting South Fork.

The win was the second for the Tigers over the Cubs in two weeks, with the two wins coming by just a combined three goals. 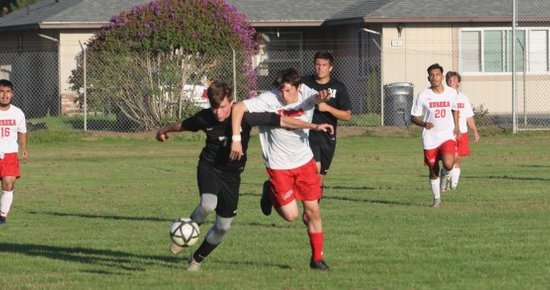