St. Bernard’s head coach Matt Tomlin and his players know what they have to do to continue their recent dominance over Little 4 opposition this Saturday.

Playing their only home game in the opening seven weeks of the season, St. Bernard’s (2-0) welcomes Arcata (0-1) to Crusader Field, and key to winning the game will be containing the Tigers’ most dangerous weapon, running back Kien Mazzotti.

“Mazzotti is a player we’ve got to be aware of where he is at all times,” Tomlin said of the junior, who ran in for three touchdowns in his team’s opener. “We’ve got to stop No. 8 and make somebody else beat us.”

Arcata, meanwhile, comes into the game fresh off an early-season bye, after opening with a 49-28 loss on the road at to a good South Tahoe team.

And for head coach Jamal Jones, the key to this weekend’s game will be the play of both lines.

The Crusaders have plenty of momentum heading into the game, the only one this weekend featuring two local teams.

St. Bernard’s is coming off back-to-back impressive road performances, winning big at El Molino (36-7) and Hoopa (39-14) the past two weekends.

Last week’s win was the 29th straight for the Crusaders over L4 opposition.

Expect the Crusaders to look for another fast start, with their skill players already playing in mid-season form.

In particular quarterback Will Omey and Lane Thrap, who have combined for three touchdowns through the air in each of the first two weeks.

The Crusaders’ performances, however, haven’t been flawless.

“Our playmakers are making plays and we are doing some good stuff,” Tomlin said. “We just created too many penalties last week.”

There will be no JV game, with varsity kickoff set for 1 p.m. 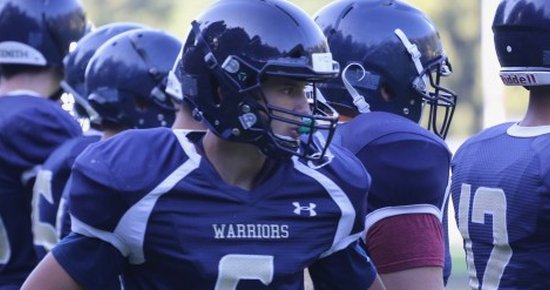