The defending champs are off to a winning start in the Big 5 after the Fortuna Huskies overcame an understrength Panthers team by a score of 78-56 at McKinleyville High in boys basketball on Wednesday night.

Junior Bo Cox had a big game in the win, scoring a game-high 21 points and pulling down 17 rebounds, as the Huskies improved to 1-0 in the Big 5 and 7-9 overall.

Another junior, Chaz Schlesiger, also had a big game off the bench for Fortuna, finishing with 12 points, while Jaden Kelley scored 10.

“We played okay. There are always things to improve on,” Fortuna head coach Tony Miles said. “We turned the ball over too many times. But overall our energy was very good, our intensity was good. The boys really worked hard.”

Despite their losing record the Huskies have been competitive so far this season, with many of the losses coming in close games, and Wednesday’s win will give them a boost heading into a crucial league run.

“Most of our games have been pretty close. The boys are competing. They love to compete,” Miles said. “If we play well, we’ll be right up there with the others.”

The ever-reliable Fernando Atilano also had a big game for Fortuna, finishing with nine points, while Branson Gans scored eight.

For McKinleyville, which is now 5-10 overall and 0-1 in the Big 5, Jack Clancy scored a team-high 10 points, with Michael Boatright adding nine points.

The Panthers were playing without six players, including four starters, who have been suspended for the season for violation of team rules.

Several younger players were brought up to the team to fill in, although they were added at the last minute.

“We haven’t been able to practice yet and so that really showed,” McKinleyville head coach Sonny Tripp said. “We had a lot of silly mistakes both offensively and defensively.

“But in the long run it will probably be beneficial for these guys. They were all going to be varsity players at some stage.”

All five players added to the varsity roster are 6-foot-2 or taller, adding height to the team.

The suspended players were all on hand in the student section supporting their team on Wednesday night.

Freshman Brandon Bento-Jackson scored a game-high 16 points to lead the Tigers past the Wildcats in their final game before conference play on Wednesday.

Arcata overcame a slow start to get the better of the Little 4 opposition, improving to 11-6 on the season ahead of Friday’s Big 5 opener at home to McKinleyville.

For Ferndale, which dropped to 10-4, Cody Sampson and Tristen Martin each scored a team-high eight points.

The Wildcats’ pushed back their Little 4 opener from this Friday night to next week, and will instead play Archbishop Hanna on Friday. 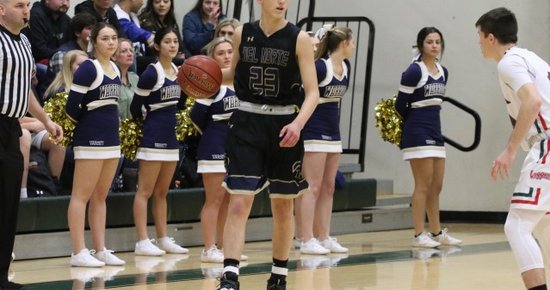