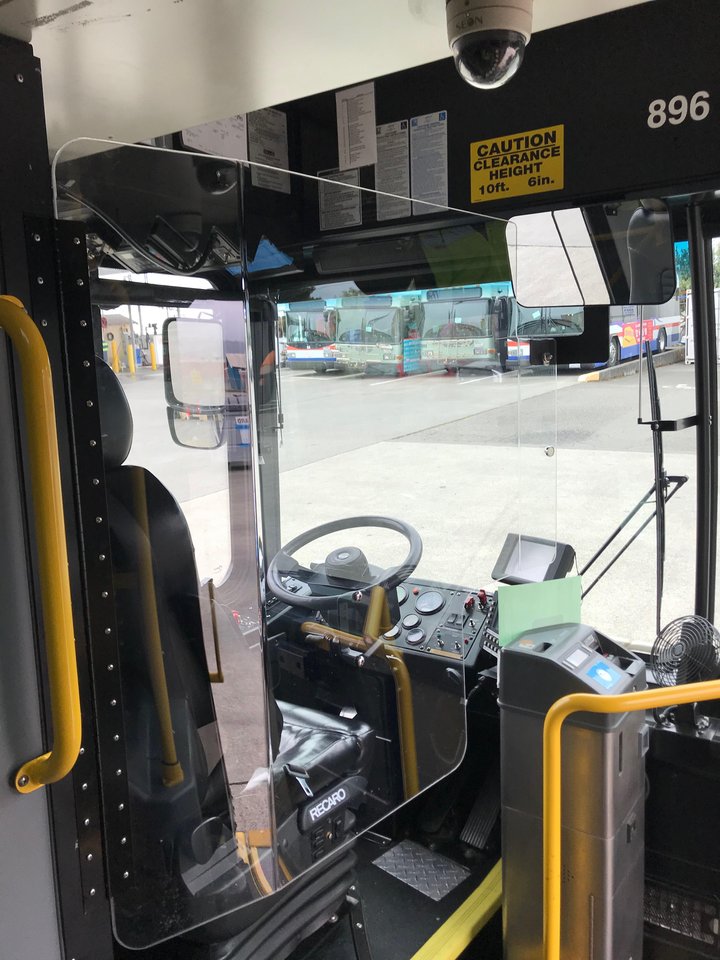 Photos of the new shields. | HTA

As a COVID-cautious Humboldt County inches toward normalcy, the local transit authority is adding bus routes and reimplementing fares next week.

Humboldt Transit Authority General Manager Greg Pratt told the Outpost that the HTA had to cut its routes by half when the county issued a shelter-in-place order in March. But by Monday, Pratt said, roughly 80 percent of HTA routes should be running on schedule.

“Starting Monday, we are going to increase our service,” Pratt said. “We did scale back, but now that we have our maintenance staff and drivers set in place we are able to open up our schedule.”

Thanks to funding that was initially earmarked for a promotion that would have allowed passengers to ride the bus for free on Tuesdays, the HTA has been able to offer passengers free rides since March 23. Pratt said those funds have since run out, but the HTA may eventually be able to offer reduced fares though the CARES Act.

“We were going to run a promotion before the pandemic broke out,” he said. “I had some grants for free fares. Instead of us running that [promotion] for three or four months, we used the funds on free fares for as long as we could. Now that that’s dried up, we have to go back to charging.”

For the last month, the HTA has also required riders to board through the rear bus doors. However, starting Monday, passengers will be able to enter buses through the front doors again, because the HTA has purchased face shields and installed plexiglass doors for its drivers.

“[The plexiglass is] equivalent to a sneeze guard to protect [drivers] from any possible transmissions,” Pratt said. “We haven’t had the proper PPE for the drivers but we finally got our masks.”

While most routes will be up and running next week, the HTA’s most at-risk drivers will remain on paid administrative leave (funded by the CARES Act) until the County deems that it safe for them to return to work.

Social distancing and face masks will also be required for all bus passengers until further notice.

Here are a list of bus safety tips provided by the HTA: