What About Sports? Humboldt’s Kid Athletes and Their Coaches are Preparing For Spring Seasons, but the State Still Hasn’t Let Anyone Know If or When Games Will be Possible » 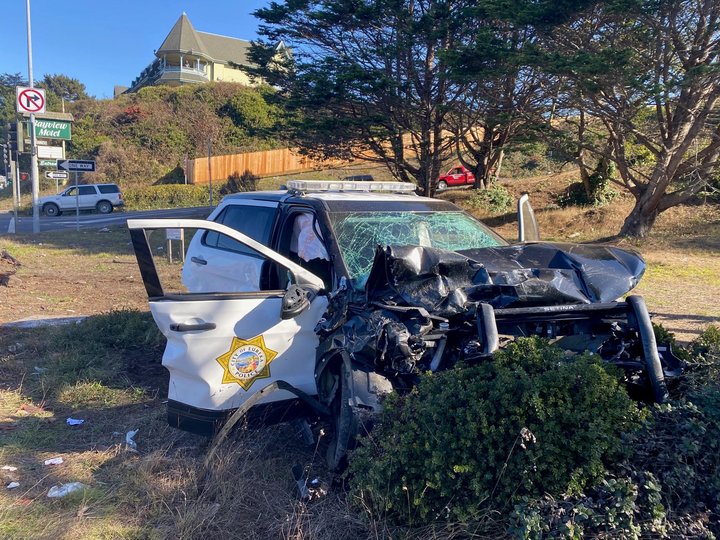 Today at 9:25 a.m., officers of the Eureka Police Department were dispatched to a hotel located at the 800 block of W. Wabash Ave. for a reported assault that had just occurred. The Reporting Party (RP) stated that a male had just been witnessed assaulting a female. Descriptions of the involved parties were also provided by the RP.

Upon arrival, officers located the involved parties. The male was seated in a black Chevrolet Impala. Officers attempted to detain the male as part of the assault investigation, but the male refused to comply with commands or exit the vehicle. The male then fled the scene in the Chevrolet Impala. Officers pursued the suspect southbound on Broadway. When the pursuit reached the intersection of Broadway and West Henderson Street, the suspect and lead pursuing EPD vehicle made it through the intersection, however the second pursuing EPD vehicle was involved in a collision with an uninvolved motorist.

Emergency medical personnel were summoned to the scene to aid both the uninvolved motorist and the officer. Both parties were ultimately transported to St. Joseph Hospital’s Emergency Room for treatment. The California Highway Patrol (CHP) also responded to the scene to assume primary investigative responsibility for the collision.

The suspect’s Chevrolet Impala was soon located in Fortuna by Humboldt County Sheriff’s Office (HCSO) deputies. The suspect once again fled in the Impala. A pursuit was initiated and the suspect led HCSO deputies and CHP officers throughout the Fortuna and Loleta areas and then southbound on Highway 101. The suspect drove in a reckless manner with highway speeds reported to be in excess of 100 MPH. The suspect’s vehicle was ultimately disabled with the use of a spike strip just south of Scotia. The suspect was quickly taken into custody without further incident by Sheriff’s deputies and CHP officers assisted by law enforcement from other agencies.

A Eureka Police Department Detective has since conducted interviews of the victim and witnesses, along with connecting the victim with resources to assist her with her abusive situation.

The suspect was identified as Michael Caleb Reed (35-years-old). Reed was determined to be on active parole out of Bakersfield, CA. Reed was booked into the Humboldt County Correctional Facility (HCCF) on charges of domestic violence, evading arrest, felony evading causing injury, resisting arrest and parole violation. Additional charges may also be added as the investigation continues. Reed is not eligible for bail due to his parole status.

The uninvolved motorist was examined and treated at the emergency room for her injuries. The Eureka Police Department extends our best wishes for a speedy recovery to the injured driver and her family. The injured EPD officer, Camaron Hooks, sustained moderate to major injuries as a result of the collision. Due to the nature of his injuries, he was flown this afternoon to an out of the area trauma hospital for further treatment. Officer Hooks is in stable condition awaiting surgery. We are releasing his name to the public with his family’s permission.

EPD Chief Steve Watson: “On behalf of Officer Hooks’ family and the Eureka Police Department, thank you for the many expressions of support and concern for his welfare that have poured in today from members of our community. Please keep Camaron and his family in your thoughts and prayers. We would also like to thank all the local law enforcement, emergency medical, and Humboldt Bay Fire Department personnel who assisted during this incident. This includes the St. Joseph Hospital Emergency Department staff who took such great care of Officer Hooks while he was in their care. Camaron loves this community and his job as a police officer tremendously. His EPD family already misses his booming voice, infectious positivity, and big smile, and we look forward to his return to duty following what we hope will be a swift and sure recovery.”

It is still early in the investigation and further updates will be released as appropriate. Anyone with information regarding this incident is urged to call Detective Harpham at (707) 441-4305.