« (AUDIO) HUMBOLDT HOLDING UP: A List! The Top 10 Movies Made in Humboldt*, According to Film Commission’s Cassandra Hesseltine and Nate Adams 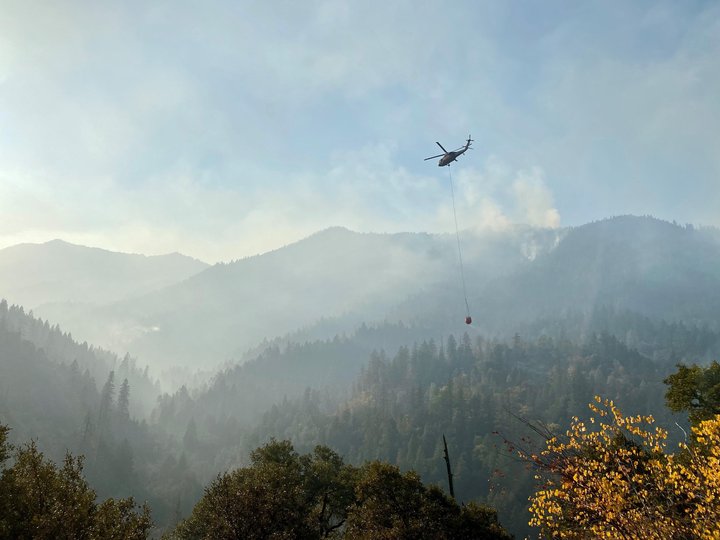 A helicopter unloads its water bucket over the Red Salmon Complex. | InciWeb

Notice: Yesterday, there was an intrusion into the restricted airspace over the fire by a drone. Temporary Flight Restrictions remain over the entire Red Salmon fire area until further notice. This includes drones. Remember: If you fly, we can’t.

Yesterday: Fire activity continued in the South Fork of the Salmon River, Methodist Creek, Plummer Creek, and the East Fork of the New River. A previous spot fire outside of containment lines north of Barron Creek began reburning as fuel drying continued. Firefighter’s combined ground based suppression efforts along with aerial water drops to cool that hotspot.

Weather and Fire Behavior: Unseasonably warm temperatures will continue today. Fuel moisture levels continue to decline allowing the fire to remain active for the near future, with moderate fire behavior. No rain is forecast in the immediate future. With the dry weather, higher elevations with unburned islands are likely to ignite. Smoke impacting the area remains likely. For information on smoke impact, go to www.airnow.gov.

Today’s Operations: Along the western flank of the fire, crews will continue to monitor containment line in the Colgrove Branch drainage and repair fireline no longer needed. On the northeastern flank, crews will patrol and mop up along the Salmon River to keep fire south of the river. On the southeastern flank, firefighters are securing fireline to keep fire east of Miller Ranch and west of the East Fork New River. Structure defense crews are removing structure defense systems where the fire threat has been mitigated and maintaining systems where the threat remains.

Fire suppression repair (restoring fireline to prevent soil erosion) is being completed within the Wilderness and on all flanks of the fire where fire has been contained. Resource advisors help direct this work to protect sensitive natural and cultural resources. As fire containment increases, a big task for crews is to gather and return the miles of hose, water pumps, and portable water tanks back to fire camp for cleaning, packaging and shipping.