HSU’s New Men’s Basketball Coach Arrested for DUI; University Says He Will ‘Take Some Time Away From His Coaching Duties’ » 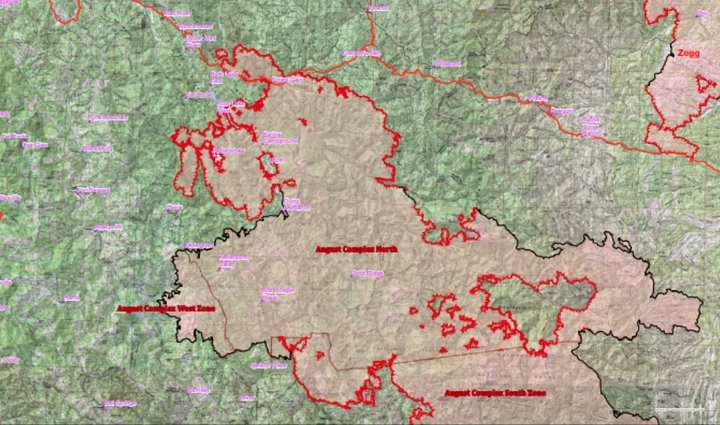 West Zone of the August Complex

Yesterday in the Humboldt Operational Sector crews made some progress building contingency lines near Zenia and working an area of the fire that had crossed containment lines and burned onto State Responsibility Area. However another day of hot dry weather with continued north to northwest winds is expected to bring another day and night of active fire behavior.

Slope-driven runs are expected to again create challenges on the West Zone.  Clearer air yesterday allowed more use of aircraft.  Helicopters dropped 372,000 gallons of water over the fire yesterday with several of the aircraft reaching their maximum daily flight time limits.

A firefighter working in the North Zone of the August Complex. | InciWeb

North Zone of the August Complex

Residents have had many questions about the status of their property resulting from the wind- driven firestorm last Sunday and Monday. Trinity County Office of Emergency Services is responsible for damage assessments. County staff will enter affected areas as soon as it is safe to do so and directly notify owners; your patience is appreciated.

Many hazards remain throughout affected areas, such as falling trees, downed power lines, and hotspots. Fire danger remains extreme with dry vegetation, drought conditions, very low relative humidity, record temperatures, and potential for additional wind events. Residents are not permitted entry into evacuated areas until the Sheriff lifts the orders. The public safety officers continue to enforce roadblocks for firefighter and public safety as well as property protection. The Sheriff issued evacuation orders yesterday for Hidden Valley, Indian Valley, Bear Wallow, Rowdy Bear, and Friend Mountain. Please comply with the Sheriff’s orders; prepare to evacuate during a warning and leave quickly when an evacuation order is issued. Failure to evacuate diverts firefighters and public safety officers from protecting homes to assisting residents who should have evacuated.

Hot and dry conditions prevail again today, with temperatures exceeding 100 degrees at lower elevations. Light winds from the northwest are forecast with potential to increase in the afternoon. Dense smoke persists, particularly in the deeper valleys. While smoke provides shade and moderates fire behavior, it also inhibits aircraft operations.

The fire continues to move north of State Route 36 toward Bear Wallow and south toward Forest Glen. It also is moving to the southwest in the drainages and valleys south of Ruth Lake. The fire still has substantial potential for spread in drainages aligned with the winds. Firefighters are constructing dozer lines to the north and west from Post Mountain/Trinity Pines. Crews are continuing structure assessments and protection measures for potentially affected structures and properties near the fire perimeter.

Resource shortages continue across the western states, including California, due to the scale of the wildfire season this year. Firefighting strategies are constantly adapting to environmental conditions and resources available. Resources are managed not only within an individual fire, but across regions and the nation. Several times, including during the recent high wind event on the North Zone, CalFire responded from the West Zone to requests for assistance to defend life and property. They sent staff and equipment to assist for 24-hour shifts in the Ruth area. CalFire continues to be engaged in Zenia, Kettenpom, Watts Lake, and other areas on the west side of the fire. The coordinated effort continues for positioning resources where they will be most effective. Deputy Incident Commander Tom Kurth emphasized, “We are bolstering organizational oversight while dealing with persistent fire growth and shifting priorities.”

Residents are urged to evacuate from the fire area. Failure to evacuate diverts firefighters from protecting homes to assisting residents who should have evacuated. Evacuation information for Trinity and Humboldt counties is available from the Red Cross at 530-276-8034.

Trinity County Office of Emergency Services will conduct structure damage assessments when it is safe to do so. They may be contacted at: 530-623-8223.

Each forest has closures in place. Individual forest closure information is available online:

It is critical that all national forest visitors follow these important closures and restrictions for their own safety and the safety of our firefighters. Many hunting areas are closed due to wildfire activity; for more information visit: https://www.fs.usda.gov/visit/know-before-you-go.

Smoke from interior burning and defensive firing, intermingled with that from the August Fire Complex, continues to blanket communities in the area. Light, variable winds, and the continued inversion, prevent smoke dispersion causing poor air quality and visibility restricting availability of Air Support. Motorists should use caution when driving, particularly on narrow, winding roads.

No significant weather changes are expected. Low temperatures should range from the mid-50s to the mid-60s with highs from the lower 70s to the lower 80s. Minimum relative humidity should be in the 20s in the higher elevations with mainly 30s elsewhere.

Crews continued defensive firing along Hotelling Ridge, staying just ahead of the main body of the fire, which is backing down toward Cecilville Road. The fire has filled in around Knownothing Creek and is approaching the South Fork of the Salmon River as planned. Additional crews have been brought in to continue structure protection in the Godfrey/Black Bear/Blue Ridge area and around Cecilville. Firefighters have identified areas to put in line to protect and defend Summerville.

An additional dozer was brought in to strengthen and aid ongoing fireline construction between Miller Ranch and the fire. Crews are using defensive firing along Bake Oven Ridge to reinforce the line. Over the next few days, the fire is still holding well along the trail near Horse Linto Creek. Crews have constructed fire control line around the slop over near Colgrove Branch of Mill Creek.

Strategic firing operations are planned today to strength the lines. Road repair is ongoing in the northern area of the fire.