« What to Know About Gig Worker Pay Before Voting on Prop. 22

MEASURE C: Ranked-Choice Voting Would Bring More Democracy and Better Democracy to Eureka, Backers Say, but Citizens Will Have to Get Used to a New Way to Cast and Count Votes » 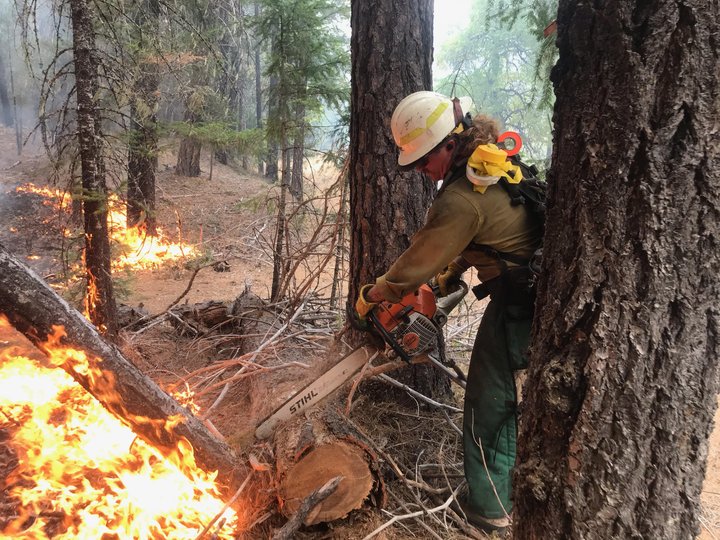 A firefighter involved in extinguishing the fire along a section of Van Duzen Road on the Northwest Zone of the August Complex. | Photo by Jacob Welsh, provided by InciWeb.

Incident command teams for the Northeast and Northwest Zones:

The August Complex has been divided into four zones: Northwest, Northeast, South and West. The dividing line between the Northeast Zone and the Northwest Zone is along South Fork Mountain, crossing State Route 36 near milepost 56 and continuing north along the South Fork Trinity River. The separation into two zones on the north will provide more supervision to personnel, increased oversight and improve the effectiveness of fire resources.

Smoke is still expected to stay in valleys throughout the day. Winds will be light out of the southwest. It continues to be hot and dry with a front approaching in the next several days.

Northeast Zone – Yesterday, firefighters took advantage of favorable light easterly winds over the fire area. The fire north of Round Mountain continues to back down into terrain that is difficult to access. Crews are scouting for opportunities to go direct, if safe to do so. Hotshot crews were able to engage the fire edge north of Beegum Creek. As smoke cleared due to east wind, aircraft were able to fly and support these crews with retardant and water drops.  Crews will scout for locations to construct contingency lines.  The burned area of the Buck Fire continues to be a good holding feature. The fire perimeter east of Yolla Bolly Mountain is in patrol status.

North of Forest Glen, firefighters are going direct to keep the fire between State Route 36 and Forest Road 14 and are improving contingency lines. Fire is slowly backing down to SR 36 south of Post Mountain and work on the contingency lines continues around Post Mountain. Structure preparation work around Wildwood, Harrison Gulch and Platina is ongoing. The primary and secondary containment lines west of Rowdy Bear and Indian Valley to the South Fork Trinity River are being improved utilizing forest roads and old fuel breaks.  Heavy machinery is being followed by fire crews brushing along the lines. Caltrans and fallers are clearing hazard trees along SR 36.
More than 250 Marines and sailors from Camp Pendleton, Calif., will be arriving on the August Complex Northeast Zone on Wednesday, Oct. 7, after being reassigned from the Creek Fire on the Sierra National Forest. There will be five strike teams formed from 10, 20-person crews along with their overhead personnel and a medical unit. They have been trained in firefighting tactics and have utilized their new skills from the past two weeks on the Creek Fire.
They have built fire lines, conducted tactical firing operations; cold trailed and mopped up perimeters. They will be integrated into the ongoing suppression efforts on the Northeast Zone starting Thursday. The service men and women are assigned to Camp Pendleton’s 7th Engineer Support Battalion, 1st Marine Logistics Group, 1st Marine Expeditionary Force.
Northwest Zone – Good progress was made on putting out spot fires on the east side of the South Fork Ridge. Crews worked on a 50-acre spot fire north of Ruth Lake and west of South Fork Ridge, which is now stable. If conditions align, firing operations may be used to reduce fuels between the edge of the fire and containment lines in multiple locations across the Northwest Zone today.

This will lead to better overall containment of the fire and allow crews to hold the fire within control lines. From SR (Hwy) 36 downhill to Ruth Lake, containment lines will be further secured to keep the fire from moving towards the northwest. Firefighters will work to secure a new dozer line north of Journey’s End and structure groups will continue to protect buildings as the fire backs downhill.

Fire personnel will be working on dozer lines and contingency lines from the west side of Ruth Lake, through the previous Gobbler and Lassics Fires to below Mule Ridge.

North of Zenia, if conditions cooperate, firefighters may carry out a firing operation near Big Meadow Creek to reduce fuel between the edge of the fire and the contingency lines that run from Coffee Pot to Round Mountain. Near Salt Creek, crews will improve containment lines around Little Round Mountain to hold the fire north of Kettenpom, in cooperation with CAL FIRE. Where crews cannot directly fight the fire due to terrain or safety concerns, they are using indirect techniques such as anchoring to road systems and using dozer lines for containment well ahead of where the fire is currently burning.

Map of the August Complex.| Incident Command teams for the Northeast and Northwest Zones.