PG&E PSPS ALERT: A Few Humboldt Communities May Have Their Power Shut Off This Week Due to Concerning Weather » 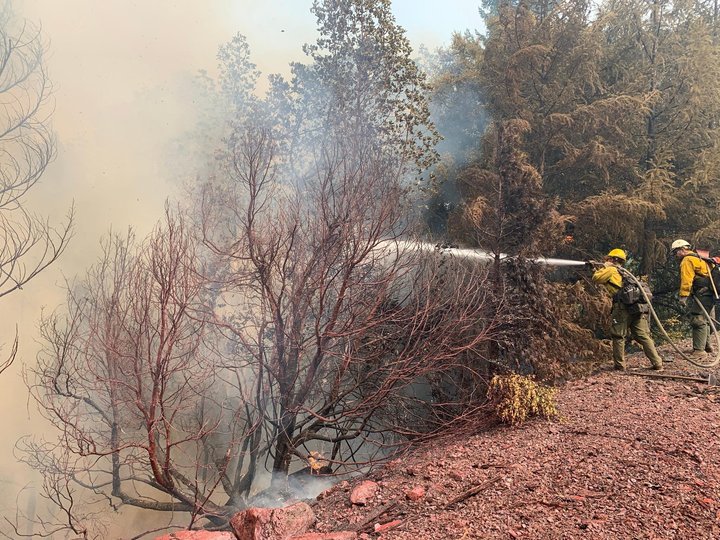 The Monument Fire burning along Highway 299 in Trinity County between Burnt Ranch and Junction City has grown to 97,287 acres and is now 10 percent contained.

A team of 863 firefighters is actively working to contain the fire.

“Last night, the Monument fire was extremely active on all flanks, predominately to the southeast,” the fire’s incident management team stated today. “The fire exhibited long, uphill runs and group torching as it advanced towards Sky Ranch Road in Junction City, prompting the evacuation order issued by the Trinity County Sheriff’s Office.”

An evacuation warning has been issued for residents north of Highway 3 from the Wildwood Road to Hayfork Summit.

“As the fire intensified, firefighters and heavy equipment resources were reallocated to the area,” the incident management team stated today. “Crews made an aggressive attack to keep the fire within the containment lines, preventing further spread. Crews concentrated their efforts on point protection, defending structures and the values at risk in and around the surrounding area of Junction City.”

American Red Cross evacuation shelters are set up at Shasta College at 1555 Old Oregon Trail, Building 1900 in Redding and at Trinity Valley Elementary School at 730 Highway 96 in Willow Creek.

A domestic animal shelter is in place at the Trinity County Animal Shelter at 563 Mountain View St. in Weaverville (530- 623-1370). Domestic and large animals can be taken to the emergency shelter at the Hoopa Rodeo Grounds on Pine Creek Road in Willow Creek.

Highway 299 remains completely shut down by the fire between Hawkins Bar and Junction City.

Firefighters estimate that the Monument Fire will be fully contained by September 1.

The McFarland Fire burning along Highway 36 in trinity County is now 51,909 acres in size and remains 68 percent contained.

A team of 662 firefighters is actively working to contain the fire and is still determining how far the fire pushed to the east and south last night.

“Yesterday, gusty and dry west to northwest winds surfaced over the fire area and increased fire activity,” the fire’s incident management team stated today. “Extreme fire behavior pushed the fire to the east into Beegum Peak and over Tedoc Mtn. Fire continued to push and spot to the east and southeast. Crews were able to get a dozer line in Pattymocus Butte last night to keep fire off the Highway 36 corridor. The northwest section of the fire area remained relatively calm after mop-up efforts.”

An evacuation warning has been issued for all residents on the south side of Highway 36 and 1 mile north of Highway 36 from the Shasta-Trinity County line to Platina.

Highway 36 is completely closed between Highway 3 and Bowman Road.

Firefighters estimate that the McFarland fire will be fully contained by August 21.