TODAY in COURT: Another Delay in Case of Woman Accused of Reckless Driving For Plowing Through McK Black Lives Matter Protesters » 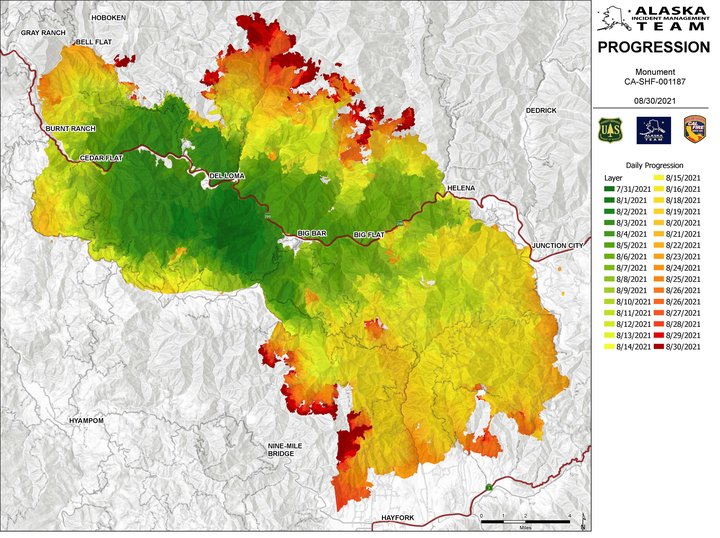 A progression map of the Monument Fire’s spread. | Inciweb

The Monument Fire burning along highway 299 in Trinity County between Burnt Ranch and Weaverville is now 164,746 acres in size and 29 percent contained.

“The Monument Fire continued to burn to the north and northeast in the Trinity Alps Wilderness and has progressed down to the North Fork of the Trinity,” the fire’s incident management team stated this morning. “Firefighters plan to use an Unmanned Aircraft System with an infrared camera today to see if the fire has crossed to the east bank. If the air is clear enough to use helicopters, the plan is to drop buckets of water in that area to keep the fire west of the North Fork or at least slow its advance on the east side. Nearby crews will continue to strengthen and improve a series of lines on the East Fork Road, in Hobo Gulch and along Canyon Creek Road in case the fire continues to progress to the east.”

Hawkins Bar Volunteer Fire Department Chief Todd Wright informed the Outpost that a rappeller crew working on the Monument Fire had to ferry out all of their equipment across a 140-Foot canyon yesterday after conditions became too smoky for them to be flown out.

“The rapellers that were inserted the other day are coming out [today] and — with it too smoked-in to fly — we were tasked with figuring out how to get their gear and them out of there,” Wright said. “After talking with them yesterday, we came up with about the only option available. They had to hike on the trail from the New River to just above Gray Falls, and from there, at roughly 140 feet above the river, we set up a Tyrolean highline and used that to ferry their gear across a distance of 225 feet.”

To get the equipment out safely, the team rigged 1,600 feet of rope across the Trinity River at the site of an old, defunct footbridge north of Burnt Ranch.

“To get the ropes across, we had to set up another set of ropes to rappel down to the river and swim or ropes across, then climb the other side and get them tied in,” Wright said.

“We were taking loads of about 80 pounds per shot, and everything went perfect,” he said. “We extracted most of their gear and resupplied them with water, Gatorade, and even picked up two pizzas [for] them so they could have a hot dinner.”

Today, the Hawkins Bar Volunteer Fire Department is back on scene helping to collect the remaining equipment and get the rappeller crew out.

Evacuation Orders: In effect for Barker Mountain, the northwest portion of Hayfork Summit and North Hayfork Valley, north of Highway 3 including the north side of Hyampom Road from Hayfork to 9-Mile Bridge.