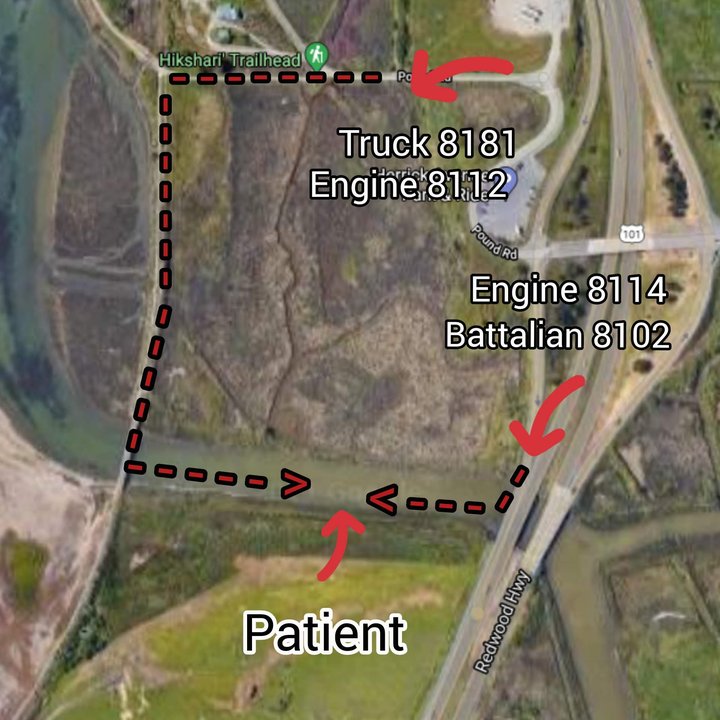 At 7:42 p.m. Humboldt Bay Fire was dispatched to report of a male floating in the water of the Elk River Slough near Pound Road.

Engine 8112 responded with one Rescue Swimmer trailed by Truck 8181 with three Rescue Swimmers and proceeded to the foot of Pound Road at the Hikshari Trail to make access to the patient.

Meanwhile, Battalion 8102 and Engine 8114 with one Rescue Swimmer deployed from the Southbound 101 bridge access point to the slough. Engine 8112 was the first to arrive on scene and the Rescue Swimmer located a passerby who was able to dictate the rough location of the patient.

Scanning the waterway, the Swimmer spotted what looked to be a face floating about 200 yards away between the train trestle bridge and Southbound 101 bridge, although it was unclear if the patient was face up or face down in the water.

The Swimmer ran along the shoreline until parallel with the patient. At this time it became clear that the patient was face up in the water, but remained unresponsive to calls from the Swimmer.

The Swimmers quickly reached the patient, grabbing him by the shoulder. The patient was alive, but hypothermic and unresponsive.

The Swimmers quickly swam the patient back to shore, where three awaiting Rescue Swimmers helped get the patient out of the water and his wet clothing. Once out of the water, the patient’s condition improved and he was able to be walked, with assistance, to Engine 8114 staged on Southbound Highway 101 where he was wrapped in heated blankets and given a medical assessment by an HBF paramedic.

From there, the patient was transported to St. Joseph Hospital by City Ambulance. The Humboldt Bay Fire Water Rescue Team Coordinator commented after the incident, calling it a “legitimate save.”

“We are extremely proud of the members of our Water Rescue Team, especially after their actions tonight. Had the first rescue swimmer on scene not taken the actions he did, the patient would not have made it given the water temperature, the length of time he had been out there, and his previous medical conditions.”

Humboldt Bay Fire wants to thank the Eureka Police Department for providing officer assistance on scene as well as Samoa Peninsula Fire District for providing coverage during the incident.