« Can Newsom Build on Pandemic Lessons to End Homelessness? 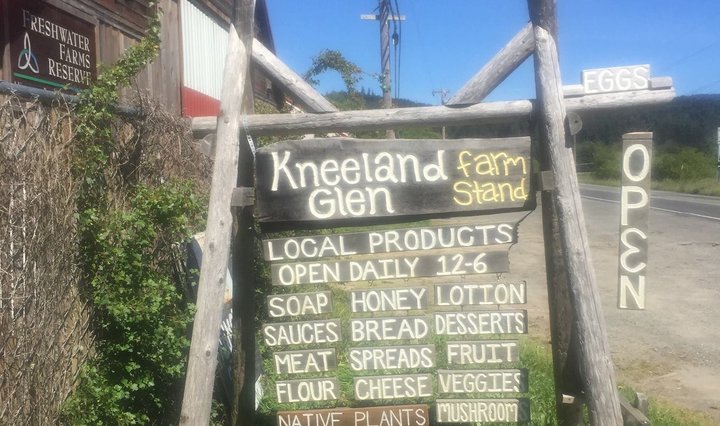 The Kneeland Glen Farm Stand, a beloved community resource for fresh produce and other locally made goods, located just west of Three Corners Market, may close permanently at the end of the month after the stand’s owner received an eviction letter from the Northcoast Regional Land Trust yesterday.

Northcoast Regional Land Trust Executive Director Dan Ehresman told the Outpost that the non-profit’s board of directors unanimously agreed to evict the stand’s owner and operator, Kathy Mullen, after she repeatedly violated her lease agreement. The decision was announced this morning in a statement issued by the NRLT.

As some of you know, the Northcoast Regional Land Trust has made the difficult decision to end the lease relationship with the current tenant of the farm stand at our Freshwater Farms Reserve property. After repeated lease violations involving public safety, several serious incidents, and numerous disregarded warnings, the Land Trust Board of Directors felt it had no choice but to sever this longstanding relationship. We take very seriously the safety of those who visit our Freshwater Farms Reserve and could not continue to put visitors or the Reserve itself at risk. Failing to take measures to prevent serious injury could have resulted in tragedy, and subsequent liability could have caused the Land Trust to incur significant damages or even to lose the Reserve. This is certainly an unfortunate situation and one the Land Trust did not take lightly. We appreciate your support of the Land Trust and Freshwater Farms Reserve, and we wish the tenant well in their future endeavors.

The “lease violations” refer to issues stemming from a dog-bite incident that took place on the Freshwater Farms property earlier this year involving Mullen’s 14-year-old corgi-mix, Tootsie. Mullen said that one bicyclist needed medical care after the dog nipped their leg while they were leaving the stand. The NCRLT also received a separate complaint after the dog gave chase to a pair of joggers on the property.

“This is the first time she’s ever done anything. She doesn’t attack people, she chases people,” Mullen said. “She’s a herding dog used to manage goats and has a tendency to chase. She was not viciously attacking. She loves people and just wants her belly rubbed.”

While Mullen repeatedly ignored warnings from the NRLT to keep her dog off the property, she took responsibility for her actions in a statement put out on her Instagram this morning.

“I feel that I have let the community down,” Mullen said. “I love you all so much. My decisions regarding my dog have caused all this. I am sorry. My love for this little 25-pound, 14-year-old dog blinded my decisions. She has been at the store with me since we opened. I was letting her run about.”

The open-air community grocery stand has also been a valuable resource for local farmers such as Amy Diekmeyer of Luna Farm in Redcrest, who relies on Mullen’s stand to purchase wholesale produce and to distribute seasonal farm-share boxes to her customers.

“We needed a place to drop those boxes off and [the Kneeland Glen stand] was perfect,” Diekmeyer said. “She was doing this for free. It was a real kindness on her part. She also buys about $7,000 of produce from us every year. My community-supported agriculture deliveries start in two weeks. Without the farm stand, I’ll have to drive from Redcrest to deliver boxes to 50 different individuals on a Tuesday.”

“Kathy was extremely generous and let us do our community-supported agriculture drop-off there last season,” Sarvinski said. “We were planning on doing it there again this season. It was really helpful for our program. She has always been very kind to me and I’m disappointed to hear this.”

The potential loss of the stand has local farmers like Diekmeyer wondering if there’s a less-dramatic solution to the problem.

“The decision seems too petty and not solution-based,” she said. “Let’s find a real solution. Maybe Kathy is willing to step down. This farm stand is amazing. She helps out about 50 different vendors, like little old ladies that can’t leave the house but need to make a living so they sell jams and bake bread. It’s so unique to our area. It just doesn’t make sense that there’s not another solution. It’s such a stab to the heart.”

While Mullen said she’d be willing to step down as the owner, she said losing the stand would put her in serious financial trouble.

A recent break-in at the stand has already put her in financial straits. Mullen said her computer was stolen from the stand two months ago, which led to identity theft and a loss of $14,000 that she’s still trying to recoup.

“We just planted the garden and all the flowers,” she said. We put a lot of money into that. It’s planting time and if we walk away, we’re going to lose everything. I wish they would be patient and give us a little more time, maybe until November when we’re all harvested.”

While Mullen has sworn to never bring her dog onto the property again, she said she’s been cut off from speaking with NRLT Executive Director Dan Ehresman and that her pleas have gone unanswered.

Vehement community members have organized a peaceful protest in support of Mullen and the Kneeland Glen Farm Stand. The protest will be held on Friday at 1 p.m. outside the Northcoast Regional Land Trust building at 901 Samoa Blvd. in Arcata.

“I hope and pray that they will give me a second chance,” Mullen said. “That’s my prayer, especially since we just planted everything. I don’t know what more I can do other than say sorry and that I won’t do it again, because I won’t.”