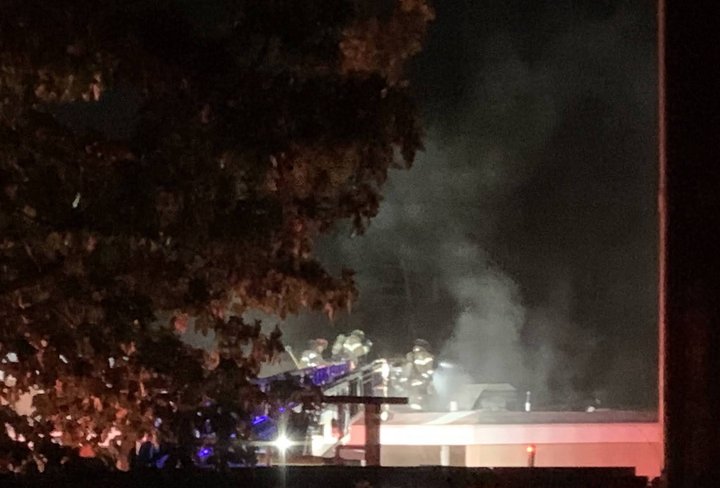 Photo of the scene provided by HBF.

Engine 8115 responded to the “Investigation of a Smell of Smoke” and descended Hillside Drive before spotting a smoke column stemming from a building off Harrison Avenue near Munson St and Hardy Dr.

As the crew arrived to the fire building they found dark smoke billowing from the eaves of the roof and an orange glow emanating from the glass door leading into the second floor.

The Captain of Engine 8115 quickly relayed the information and upgraded the call to a structure fire, prompting the dispatch of the Battalion Chief as well as Engine 8112, 8113, 8115, and Truck 8181.

The Battalion Chief responded and, upon sizing up the building and fire, further upgraded the response to a Commercial Second Alarm Fire, drawing in resources from Arcata Fire and Samoa Peninsula Fire District.

Engine 8115 attacked the fire, pushing it back from the doorway and allowing entry for an offensive fire attack as other units began to arrive. HBF crews made a great stop, saving an estimate of at least $2 million worth of property and preventing exposure to other buildings. The damage is estimated to be at least $1 million.

Fortunately, the building was vacant at the time of the fire, and there were no firefighter, civilian, or animal injuries.

The cause of the fire is still under investigation at this time.

Humboldt Bay Fire would like to thank the reporting party for calling in the suspicious smell of smoke and acting as early notification for the fire department. Given the time of night the call came in the fire most certainly would have been worse without that bystander intervention. If you see something (or smell something), say something.