How’s Getting Around Humboldt Working for You? They’re Working on a New County Regional Transportation Plan, and They’d Like to Hear Your Beefs and Kudos at a Workshop Tonight » 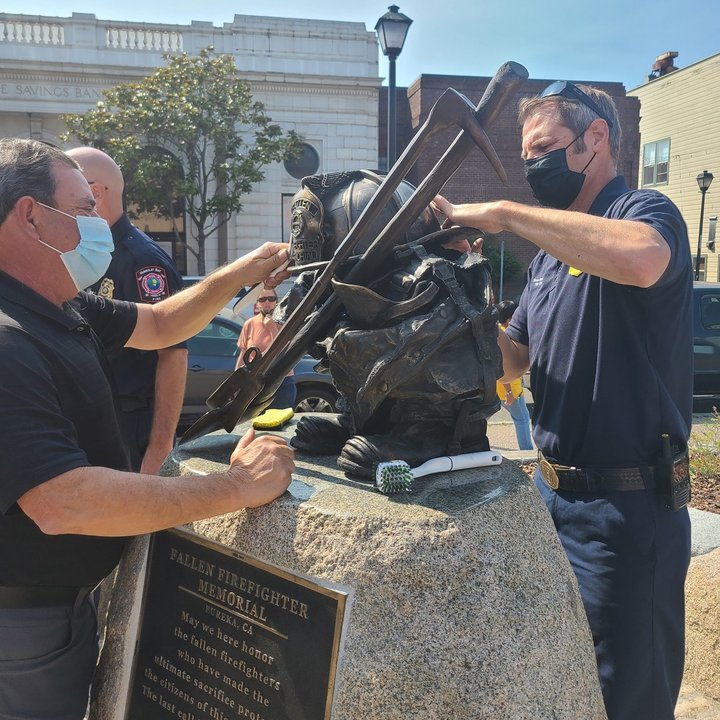 Photos of the restored memorial provided by Humboldt Bay Fire.

“Thank you so much for all the community support and for everyone who helped restore the Fallen Firefighters Memorial to its original glory,” HBF wrote.

Read the original story below.

The Fallen Firefighter’s Memorial has been defaced

Currently, black spray paint covers the monument’s central helmet (above) and can also be found on some of the plaza’s brickwork (below).

“We are disheartened and disappointed that someone would deface this important memorial and [we are] working to restore the space to its original honor,” Humboldt Bay Fire said in a statement.

On the morning of September 13, 2021, just two days after concluding a September 11 tribute at the Fallen Firefighters Memorial in Eureka, Humboldt Bay Firefighters discovered the site had been vandalized.

Black spray paint now covers the helmet of the statue, dripping down toward the turnout bottoms and boots of the sculpture. Illegible words and figures in the same black paint mar the beautiful brick work surrounding the memorial.

We are discouraged, disheartened, and disappointed that someone would deface this important memorial, especially right after the 20th anniversary of 9/11, a date that is held so dearly in the hearts of the fire community and American public. We are even more alarmed at this recent swell of crime that seems to be targeting local fire agencies. Please, if anyone has any information on the above crimes, contact your local law enforcement agency. If anyone has information or camera footage related to the vandalism of the Fallen Firefighter Memorial in Eureka, CA, please contact the Eureka Police Department to update the open case.

Humboldt Bay Fire and City of Eureka crews will be at the memorial site this afternoon to clean and restore the site to its former glory. We want to thank the City of Eureka and the Eureka Police Department for their assistance and partnership.