« PG&E Begs for Forgiveness By Giving Away Firewood to Local Customers Affected By Outages; Some Have Been Without Power for More Than A Week 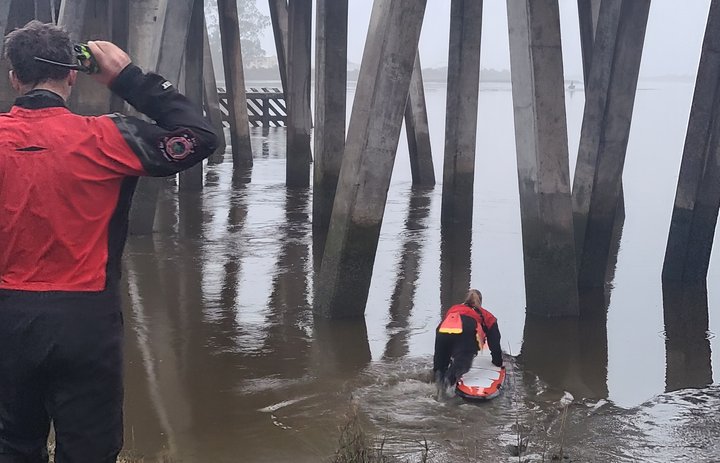 Photos of the rescue provided by HBF.

At 4:48 p.m. on Wednesday, Humboldt Bay Fire crews received report of a person trapped in a metal boat in the Eureka Slough.

We initiated a water rescue response, positioning engines staffed with rescue swimmers on either end of the slough.

The first rescue swimmer deployed from underneath the Highway 101 Bridge near Target and paddled northbound to reach the subject stranded on a mud flat. Once there, the Swimmer was able to determine that the occupant of the boat was not suffering from any injuries but had been stranded on the flat for over an hour, unable to call for help.

A second Rescue Swimmer deployed from the Jacobs Avenue loop. Together the Swimmers were able to free the boat from the mud, instructing the occupant to steer the boat ashore.

Crews met the occupant back on shore where they learned that the occupant’s trailer had been damaged and would not be able to haul the boat. Making matters worse, the outgoing tide had coated the boat ramp in slippery low-tide mud, making it risky to back the occupant’s truck down the ramp.

Crews sprayed water to clear the mud so that the truck could make it safely down, removed the motor from the boat, and lifted the boat and motor into the bed of the truck so that the occupant could drive home safely with all the belonging they came with.

Humboldt Bay Fire prides itself on delivering the same level of service to our community that we would want given to our own family. We would like to extend a thank you to the passerby who noticed the occupant trapped in the slough despite the incoming fog and called it in.

Without your call, the occupant would have remained trapped into nightfall until the tide came in without the ability to signal for help. Humboldt Bay Fire would also like to thank City Ambulance for standing by until we were able to determine that the subject was not injured.