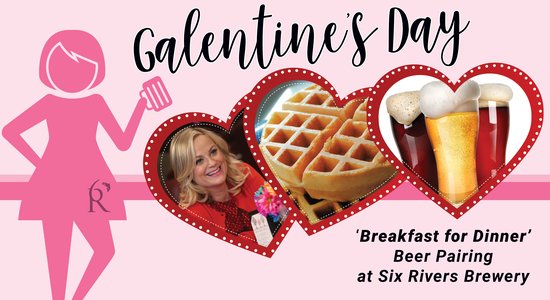 Join Redwood Girls Pint Out for a Galentine’s Day celebration at Six Rivers Brewery! Our ‘Breakfast For Dinner’ Beer Pairing features 4 - 4 oz pours of Six Rivers beer and a full pour of your favorite brew and a breakfast buffet! PLUS a guided tasting by Six Rivers co-owner Meredith Maier! More Details - Your $20 ticket includes: 4 Small Batch Craft Beers from Six Rivers Brewery - including Raspberry Lambic Style Ale, Chili Pepper Ale and two additional brews to be determined. Vegetarian Friendly Breakfast Buffet - including Waffles* and Whipped Cream, a veggie Frittata, Bacon, Breakfast Potatoes and more! *In a nod to Parks & Rec character Leslie Knope - who is considered the creator of Galentine’s Day - we had to offer waffles and, of course, lots of whipped cream! Bring your beer-loving girlfriends for a Girls Pint Out on Wednesday, February 13th. The event starts at 6pm, Breakfast is served at 6:30pm Girls Pint Out is a national craft beer organization for women. Our mission is to build a community of women who love craft beer and who are an active, contributing part of the greater craft beer community. For more information visit girlspintout.org Six Rivers Brewery is the second All-Women Owned Brewery in California focusing on traditionally brewed Small Batch Craft Beers. Six Rivers - “The Brew with a View” - has a full bar and restaurant. They are a proud member of Humboldt Made - partnering with local food producers and using local and organic ingredients whenever possible for their menu items and in their distinctive brews. Six Rivers is the culmination of good food, great beer and love of a good time. #GalentinesGPO #SixRiversBrewery #CraftBeer