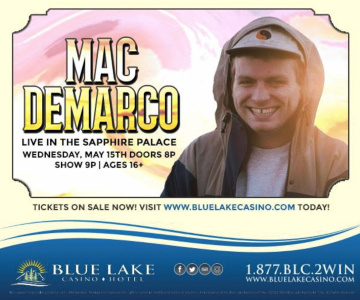 Mac DeMarco is a Canadian singer, songwriter, producer, and multi-instrumentalist. Born in British Columbia and raised in Alberta, Mac had been a part of many music bands since school. However, none of the bands was serious about a career in music. After graduating high school in 2008, Mac moved to Vancouver and finally started making music on his own. He spent an entire year to record an EP titled ‘Heat Wave,’ which was a collection of the best songs that he had recorded as a solo artist. Mac was also interested in other aspects of art and made some psychedelic music videos while ‘Heat Wave’ earned a steady success. In early 2012, he was signed by a record label named ‘Captured Tracks.’ The success of his mini-LP ‘Rock and Roll Night Club’ paved way for the release of his debut studio album, ‘2,’ in 2012. Mac then released two more albums, ‘Salad Days’ and ‘This Old Dog.’ Mac is also known for his on-stage antics and the eccentricity he exhibits on various public platforms.