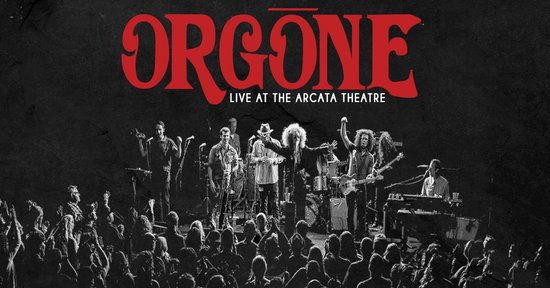 ORGŌNE: Live at the Arcata Theatre

“After two and a half years on the road, we needed to shut away the rest of the world,” recalls Sergio Rios, guitarist and engineer of Los Angeles-based band ORGŌNE. For their tenth* studio album, ORGŌNE retreated to the tranquil solitude of Joshua Tree in southern California. Ensconced in a ranch home with a recording studio for a week in November 2015, the band improvised late into the desert night, carving out tunes that would eventually become the bulk of the material on Reasons (self-released, due out January 18, 2019). The nine-song collection illuminates a band hitting its stride, capturing the raw power and refined sensibilities that defines ORGŌNE.

For nearly twenty years ORGŌNE (a universal life force, pronounced or-gōne) has churned out gritty funk and soul recordings and toured relentlessly across the United States and Europe. Traditionally both the studio and live iterations of the band drew on a tight-knit collective of the West Coast’s finest funk and soul musicians—although founding members Sergio Rios (guitar/engineer) and Dan Hastie (keyboards) have been constant anchors. However, since late 2013, Rios and Hasite have been joined by Dale Jennings (bass), Sam Halterman (drums), and singer/lyricist Adryon de León to form a permanent nucleus.