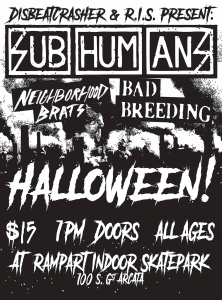 Subhumans - English punk band formed in the Warminster and Melksham area of Wiltshire in 1980. Dick Lucas joined later in the year, having formerly been in another local band, The Mental. Other members had been in The Stupid Humans. The band’s musical style is typically classified as hardcore punk or anarcho-punk
https://subhumans.bandcamp.com

BAD BREEDING - Noise Anarcho-punk from Stevenage, UK. In that time the world has become a melting pot of hate, absurdity and on the brink of destruction and Bad Breeding have made a record that sums up these dark, dense and claustrophobic times. Once again the relentless rhythm section drives the sound with guitar work that is squealing and immense alongside vocals that spit bile and razor-sharp lyrics
https://badbreeding.bandcamp.com/#_=_

NEIGHBORHOOD BRATS - California punk band formed in December 2010 by vocalist Jenny Angelillo, guitarist George Rager, drummer Kirk Podell and bassist Jasmine Watson. Originally based in San Francisco, Rager and Angelillo (the band’s principal songwriters) relocated frequently around and between northern and southern California during the band’s formative years. As the band began booking tour dates in the US and Europe, replacement members were brought in to keep the band road-ready.

2013 brought the EP Total Dementia (recorded at a facility that had previously been Death Row Records). Publicity, positive reviews and regional touring attracted enough attention to begin touring Europe, which would become a mainstay for the band’s road activity. Watson briefly re-appeared for a 2013 European tour following the release of Total Dementia.

In 2014, with Dan Graziano on bass and Podell back in the mix, the band recorded their first official LP, Recovery. Production of Recovery was a difficult process; Angelillo was dealing with personal issues and Rager was mid-divorce. Rehearsals were limited to three short sessions prior to tracking, and recording sessions were sandwiched between multiple tours. The Recovery lineup was short-lived; drummer Mike Shelbourn replaced Podell in summer 2014. Shelbourn would remain an intermittent member for several years.

The financial reality of punk touring, lack of US booking support, lineup changes and record pressing plant delays proved to be a challenge for Rager, who handled a majority of the band’s business. By January 2015, Shelbourn had bowed out of a US tour due to an emergency, and Angelillo had relocated back to the San Francisco Bay Area. In the aftermath, a 6 month hiatus occurred (Rager’s initial decision to end the band was short-lived).

Neighborhood Brats returned to touring in 2016 with dates in the US, Canada and Europe. In 2017, Angelillo, Rager and Shelbourn began preparing to record what would become the Night Shift 7”. In late 2018, the Night Shift session, coupled with a second session, were assembled to form the band’s second LP, Claw Marks.
http://neighborhoodbrats.bandcamp.com