Jason Robo Has a Trivia Night 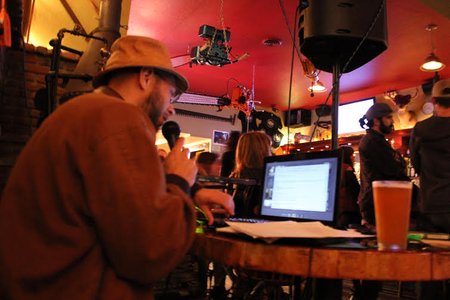 Not all trivia nights are created equal. Attend The Logger Bars’ unique mixed media trivia night, the second Thursday every month, and you are in for a treat. Each night is a long strange trip fertilized by unusual background knowledge in politics, history and economics. Being a former local activist, these days I have shifted my energy into the palatable world of stand-up comedy. Being a comedian, expect a humorous spin. Hecklers will be dealt with accordingly.

My original questions based on seasonal holidays and current events are displayed in mixed media on a flatscreen TV. This month expect queries pertaining to the holidays May Day, Mother’s Day, Cinco de Mayo, and other current event related topics. Some visual challenges include identifying classic scenes from TV/movies. Once the whole bar fell silent when I played the epic fight scene from “They Live”. Can you to name that world leader, whose mustache that is, or some odd object under high magnification? Players can try to identify audio like the title and artist of a song, sound effects from TV, video games, and movies. Some audio questions include TV show theme songs: “Love and marriage, love and marriage, Go together like a horse and carriage…”. Of course, being a funny guy myself, you will put your knowledge of legendary stand-up comedians to the test. Who said, “A house is just a place to keep your stuff while you go out and get more stuff!”? Multiple points can be scored for multi-part answers. For example, name all the keys in order of one line of a QWERTY keyboard, or the signs of the zodiac in order. Other questions include mind-bending true or false, multiple choice, and sometimes trick questions. Some local facts will also spice things up, particularly some forestry questions. Thematic music plays in the background. Some say they come just for the soundtrack.

The rules are simple: four people limit per team, no smartphones use, and no shouting out answers. That goes for non-trivia combatants. You don’t want to invoke the fury of the bartender, Bunny. You can make a silly team name. Hash Lab Explosion was one that smoked their competition. There are three rounds of ten questions with breaks for scoring, restocking libations, smoking, and handling your business. There have been a fair share of nights with tie-breaking sudden death questions.

For the winners prizes can include Logger Bar memorabilia: beer cozies, lighters, hats and $5 beer tokens. You can score schwag from artists who performed at The Logger: trucker hats, insulated stainless steel mugs, and CDs. Regardless of your score, you will learn something unusual and see the world in a new light. I certainly do when creating my abnormal questions.

The next trivia night is Thursday. Come experience this wondrous multimedia trivia experience. The Logger Bar won best bar and place to play pool in the NCJ’s Best of Humboldt too, so in a way you can’t lose. Unless you wanna shoot a game with me, then you are testing your luck.

Is socially-conscious and thought provoking humor your cup of tea? Then you can look up my Strictly Revolutionary comedy mixes on YouTube. If you want a laugh from yours truly you can catch me randomly performing with other local talent at Phatsy Kline’s Parlor in Eureka from 9-11 on Wednesdays, or at Jambalaya in Arcata from 9-11 pm on Tuesdays. If you join my FB fan page I will post some of my sets FYI. Cheers.
facebook.com/JasonRoboComic