Click below to explore these possible ward maps in detail, or to clone one as a starting point for your own. See explanation here.

This is the current ward map of the city of Eureka, as drawn right here on this website by the legendary and mysterious LOCO user who went by the handle of “Mad Balancing Act.” Now it’s out of date and YOU need to fix it. 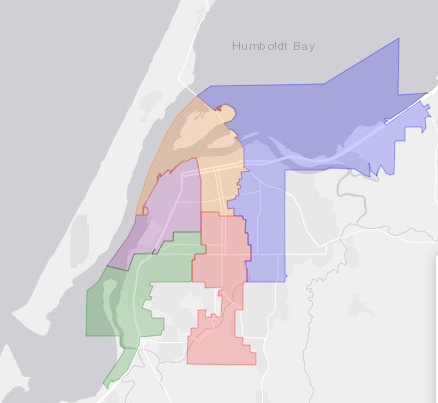 This map seeks to be as conservative as possible, given the large population shifts between the 2010 and the 2020 Census.

The Third Ward now only extends as far north as Buhne Street, rather than Wabash.

The Fourth Ward picks up Eureka High and surrounding blocks.

The boundary between the First Ward and the Fifth Ward is D Street, rather than C Street.

The Second Ward picks up Palco Marsh and some adjacent blocks east of Broadway. 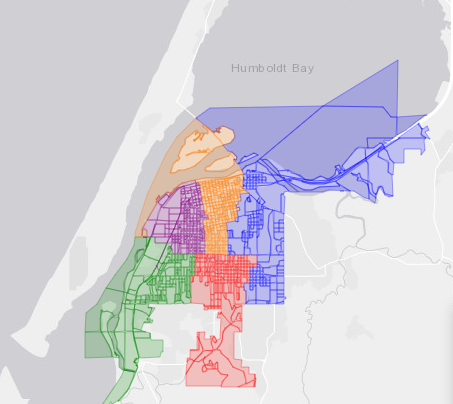 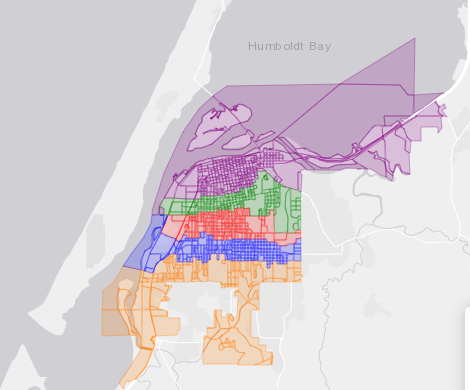 Here you get downtown and Old Town united in the Fifth Ward.

In the First you get the scrappy West Side neighborhood along with the north Broadway corridor.

Down in the Second you’ve got your Bayshore Mall, Eureka Mall and Highland Park.

Henderson Center and Carson Park join each other in the Third, which extends down to include Lundbar Hills.

And on Eureka’s east side you’ve got Ward Four, comprising Jacobs Avenue, Cooper Gulch, the hospital/medical district down to Sequoia Park. 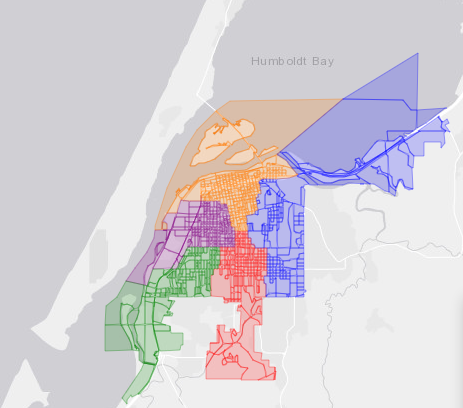 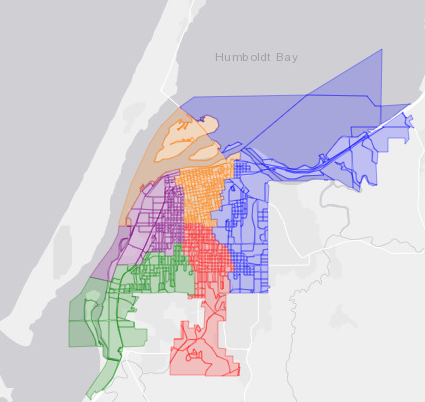 The High School definitely belongs in 4 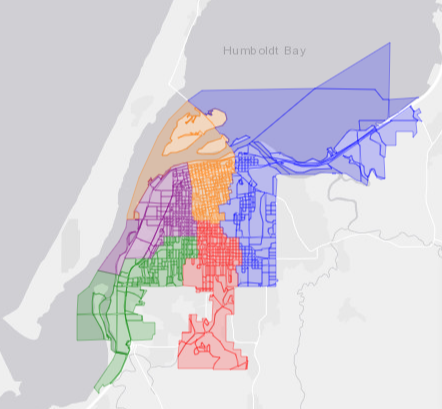 Only 18 separating the lowest from highest.

Anyone think they can get closer??? 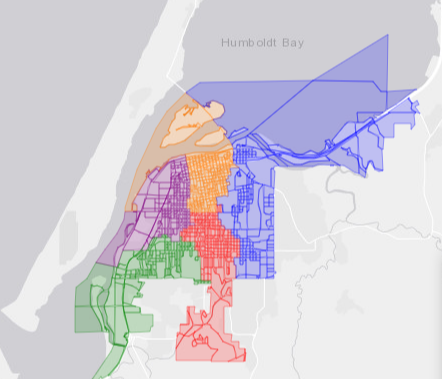 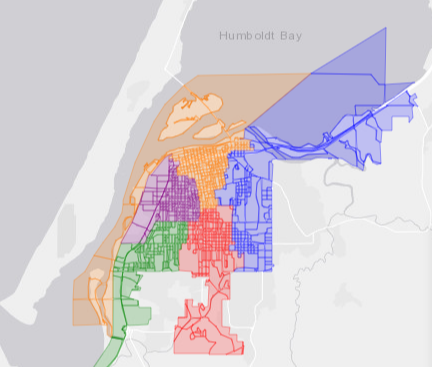 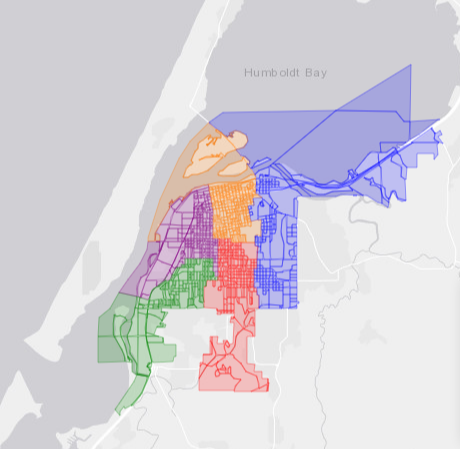 The one where they all touch 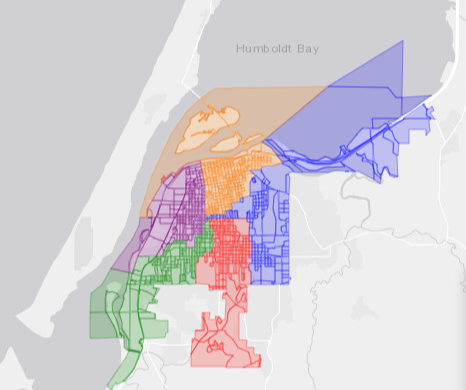 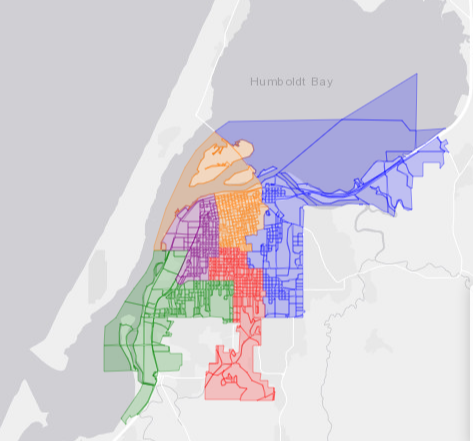 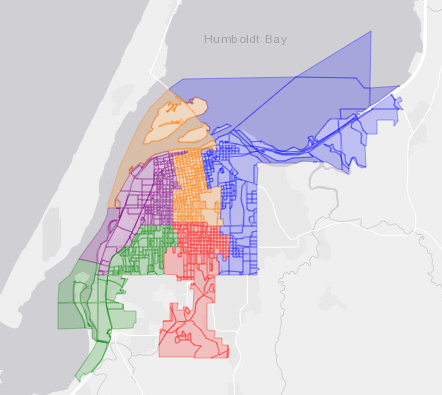 Clark neighborhood north of 14th, old town, downtown, and headed-north-out-of-town are all combined, Broadway south of the bend and its associated businesses are combined, and the bulk of residential Eureka is split into central, southern, and eastern districts 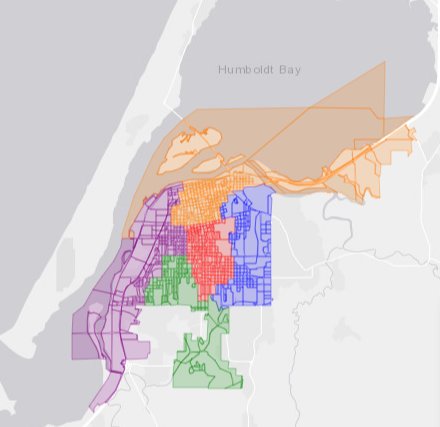 This comes very close to equal populations in each ward. In addition, rearranging to a geographically equal layout would be a refreshing change from the patch work we currently have. Would this bring equity and equality? It does bring uniformity. 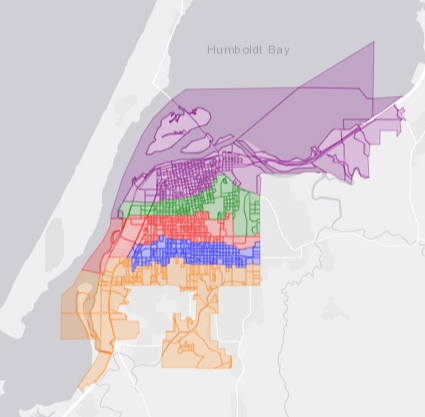 Land of Populations and Wards