« (VIDEO) THE AFTERMATH: More Details and What’s Being Done About Eureka’s Fourth Street Fire, Which Consumed Local Businesses and Left a Huge Pile of Rubble

The city of Eureka’s current ward map. Since the passage of Measure P last fall, this is illegal. You can do better.

Last fall, Eurekans finally voted to ditch their skull-crushingly dumb system for electing a city council in favor of … something a little less dumb, maybe?

From now on, the city of Eureka will be divided into five cantons, each of which will elect its own representative to the council. This state of affairs succeeds the weird-ass hybrid system of days past, when each “ward” had a seat on the council but the entire city chose which resident of that ward would sit in that seat.

The new regime, ushered in by the easy passage of Measure P last fall, requires that we draw a new map of the city’s electoral wards. The old map was laughably imbalanced in favor of the well-to-do, as you can see above: The tony Fourth Ward has fewer than half the residents of the poor, Westside-dominated First Ward — 3,882 to 7,857 — but each has its own seat on the council. This was legal, apparently, because the wards didn’t actually mean anything.

Now they do, and so the wards are going to have to hew to the principle of one person, one vote. City government is assembling an ad-hoc committee to examine possible equal-population ward maps, and the city council itself will choose one such map sometime soon. That’ll be the map going forward — until the 2020 Census, when new maps will have to be drawn.

In the meantime, though: You’re a geek for local politics, right? You have opinions! How about you draw the map yourself and show it to us all? The Outpost can help you do that!

This is the cool new Outpost game that lets you, the discerning Outpost reader, propose your own map of what Eureka’s new ward map should look like!

Here’s how you do it!

1. Browse the maps currently on offer. As of right now, that includes the current, pre-2017 ward map that the city will soon abandon, as well as a few redistricting possibilities created by Outpost staff.

2. Leave belitting critiques in the comment section underneath the maps you most detest.

3. Pick the map that most closely matches the map of your own dreams, then clone it using the big red “make your own map based on this one” button. Give your new map a name. Note the passcode the system gives you — you might need it later.

4. Get to mapping! Click on the blocks to transfer their population (from the 2010 census, as prescribed by law) from one ward to another. You’ll notice that as you do so, the numbers in the map’s legend in the bottom right corner update accordingly. When you’ve hit the sweet spot — 1/5 of the town’s population, plus or minus one percent — those numbers turn green. Get all five into the green and you’ve balanced the town’s population among each ward.

5. Justify yourself! Click on the text in the “description” box and tell us why your map rulez! Click on that little green checkbox to save your new text.

6. Your map auto-saves every minute — you can go away and come back to it — but when you’re done go ahead and press save again! You’re done! Share it with your Facebook friends!

Can you do better than this?

Your humble correspondent’s ideal Eureka ward map. Click here for rationale and detail. Think you can do better? Make your own map!

My map not only makes total geographic sense, it also pits two sets of two current councilmembers against each other in the next couple of elections. Fun!

1. You’re almost certainly not going to be able to do this on your phone.

2. Try clicking on the Balloon Track or the Palco Marsh or the jail. Yes: People who live in those places at the time of the census are counted as living there! They count!

3. Check the interesting ethnic demographic details beneath the map. Like the total population figures in the legend, they update automatically as you draw your wards. They’re included here because of one of the rationales for Measure P was that it would allow us to draw wards that would help us avoid the types of discrimination lawsuits that have been leveled at other California cities whose electoral districts were found to suppress candidates from minority groups.

In point of fact, though, it’s all but impossible to draw any Eureka ward that is anything less that 70 percent white, or more than 15 percent Hispanic. Lots of nonwhite people live in Eureka, but we’re just not a very segregated city. There’s no Latino neighborhood, for example, to divvy up and bury in whiteness. Check these reference maps, if you like:

So you can try to draw a ward map that would give more significant voice to underrepresented people, and that’s one of the four listed rationales for drawing ward lines, under the state election code: You can take into account geography, topography, “compactness … of territory” and “communities of interest,” of which ethnicity is one. But you’re going to have a damned-hard-to-impossible time drawing such a district in Eureka.

4. Eagle-eyed readers will note one discrepancy between our initial ward population sizes and those presented to the Eureka City Council a couple of weeks ago. The PowerPoint prepared by city staff  — see page 6 — reported that there are 5,424 residents in the Third Ward, and so its lines do not need to be adjusted. We say that there are 4,786 residents in the Third Ward as of the 2010 Census, and so the Third Ward needs to grow. In all the other wards, city staff’s numbers accord with the Outpost.

The error, it seems, was by the city. Look at the following table presented in the staff PowerPoint: 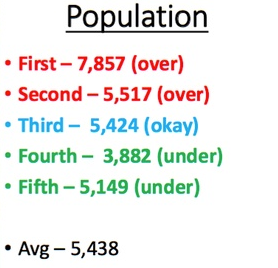 We’ve not yet been able to confirm it, but it appears that some whoopsie at the staff level caused them to overstate the population of the Third Ward in this chart. Later in the same PowerPoint — see pages 7,8 and 9 — staff use the correct numbers from 2010.

OK. Questions? Hit me up in the comments or via your usual method, whatever that is.

Get mapping! Click on over to Let’s Redistrict Eureka!