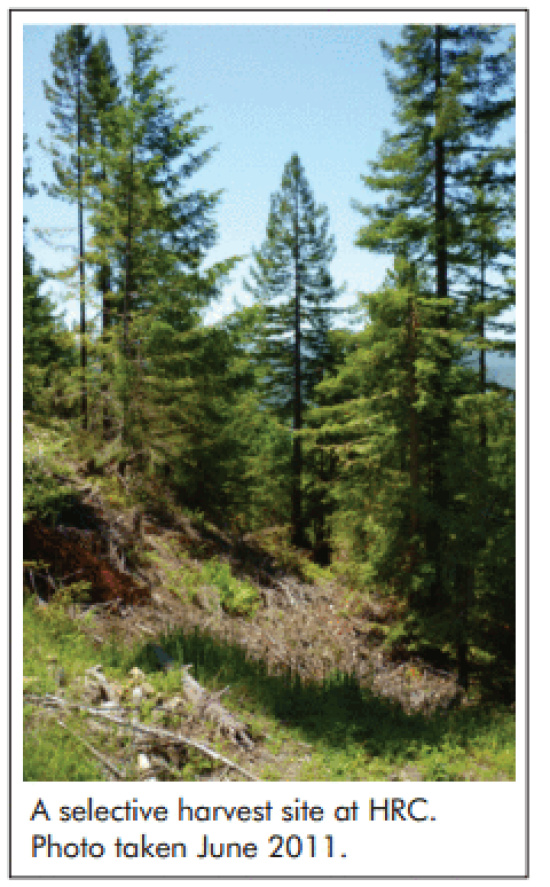 With the PALCO/Maxxam days fading into the rearview mirror, how are the new owners, Humboldt Redwood Company [HRC], doing by comparison?

SCS, often used by the Forest Stewardship Council to ensure sustainability, is the independent forestry auditor hired by HRC.

Read the SCS findings here. It’s crazy, almost unbelievably so. You’ll see a spectrum-defining contrast between the PALCO and HRC. According to Schultz, “HRC is probably the best case in forestry you can get.”

A bit of background on Schultz: he’s a scientist specializing in the Life Cycle Assesments of products, which is the overall environmental footprint of a given product from its construction and use until its eventual abandoment. He was a recent guest on KHUM’s Coastal Currents a few weeks ago, discussing the minutiae of surfing’s carbon footprint, down to the wax on the board. He thinks big about the little things.

“The findings presented by SCS comparing the MAXAAM controlled PALCO with the currently operating Humboldt Redwood Company (HRC) confirm that HRC forest practices are light years ahead of what was happening on those forest lands during the Hurwitz years. Though some serious issues of concern remain with HRC, there is no question that the company has made a phenomenal transition from the liquidation forestry of MAXAAM/PALCO. What is more, staff at EPIC have great respect for the manner in which management at HRC is willing to engage with our organization, and other local environmental advocates, when addressing concerns about timber harvest plans and other issues.” 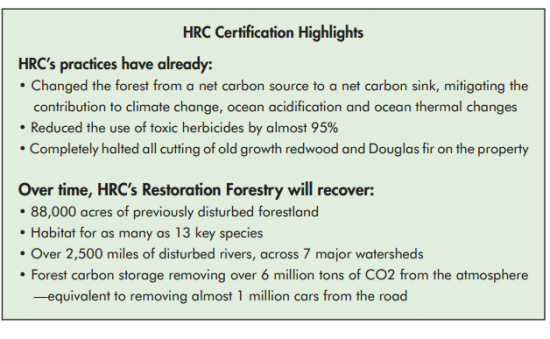 Clearly, HRC’s successes have been made easier by the state of the forest they acquired. Schultz adds that these certification results are unusual.

“Lumber from HRC is about the best product we’ve seen because usually you can’t have actual recovering occurring when you’re making most products. You’re not going to be making the environment better when you’re making a surfboard that just can’t even conceivably happen. What HRC is doing, and they are a special case, is actually causing this recovery -certainly a special case. “

Read the full interview, transcribed below:

Mike:  Tobias Schultz, are you with us?
(0.03)
-   T.S.:  I’m here
Mike Dronkers:  Thank you for coming back on KHUM.  Listeners might remember you from an episode of coastal currents we did a few weeks ago in which we talked about the environmental impact of surfing, and if you missed that, the boards have a carbon foot print but the nutshell is ‘drive less’.  If we were to summarize - that sounds about right, right Tobias?

What I specifically do with SCS is doing Life Cycle Assessment, which studies the environmental impacts of products from cradle to grave.
Mike:  And that is what we talked about with regards to surfboards, manufacturing, wax, resin and all that stuff, but when we talk about Scientific Certification Systems… is that the organization that is sometimes hired by FSC… do you know what I’m getting at here?
(1:27)

Mike Dronkers:  Ok, Forest Stewardship Council.  So, they will often hire you and you go on to logging/timberland and what do you look for?

Mike Dronkers:  How did you come to work on Humboldt Redwood Company land?  Did they ask or where you required to go there for some government audit or what triggered the process?
(2:35)

Mike Dronkers: Well, we want to find out what the differences are, who is doing it better and more sustainably.  A little bit of back ground about the Humboldt Redwood Company - they took over that land in 2008, I believe, and what they do is produce redwood decking and they also do fir beams for construction.
(3:28)

Mike Dronkers:  So that’s what they do, and now that we’ve got a little bit of history, let’s just blow the lid off this thing and start with the big question.  Who is better at sustainable forestry Pacific Lumber Company under Maxxam or Humboldt Redwood Company?

(4:44)
Mike Dronkers::  I didn’t know too much about PALCO under Maxxam, but what’s said here is that they were working on a type of forestry… like, a thirty-five year rotation tree farm.  What is the rotation that Humboldt Redwood Company is working on if that is the PALCO one?

Mike Dronkers:  Can we talk a little bit about pesticides or toxic herbicide use -  Humboldt Redwood Company vs. PALCO?

Mike Dronkers:  Again 95% reduction of toxic herbicides on the Humboldt hillsides, you can understand my skepticism like that is hard to believe.  How are they pulling that off?
(6:50)

Mike Dronkers:  What is the production difference between PALCO and Humboldt Redwood Company in terms of board feet?

Mike Dronkers:  That really seems like the simplest math you can do; let more trees grow than you cut, and then you got a healthy forest.  Humboldt Redwood Company has changed the forest from a net carbon source to a net carbon sink.  Can you talk about that?
(8:16)

Mike Dronkers:  In Humboldt County there’s a, I think since the eighties, a fairly healthy skepticism about material that comes from the forestry industry because we have been lied to.  We have had bunk science shoved on us for years and when I look at something like this it’s hard not to have that level of skepticism. But you, as a scientist, would you say that Humboldt Redwood Company get’s an A+ in terms of the environment?
(9:30)

Mike Dronkers:  At this point it’s so unbelievably optimistic, this report you guys did.  You have to question the independence of Scientific Certification Systems, which I’m not,  but it sounds like you work for them at this point.  The question I have is : how could this information transport to other timber companies in the area?  Is this the sort of thing that companies up in Oregon can adopt?  Is this sort of practice the HRC is doing irregular in any way?
(12:22)


Mike Dronkers:  We are talking with Tobias Schultz from Scientific Certification Systems.  They did a forestry audit where comparing PALCO’s legacy vs. the five or so years of Humboldt Redwood Company.  Is that enough time to make these kinds of assessments? Are these projections, or is this hard data?
(13:25)
Mike Dronkers: Tobias Schultz, thanks for joining us. I guess the next question would be is there going to be a follow up to this are going to come back to HRC land in five years and take another look at it?
(14:05)
Mike Dronkers:  Are you guys working with other timber companies right now?


Mike Dronkers:  Nicely done. Well, this is fantastic resource, and it’s truly surprising.  It’s hard not to be skeptical about it but just looking at it seems like HRC is doing a Bang up job of fixing the forestlands.

Tobias Schultz of Scientific Certification Systems,  thank you so much for your time and we appreciate your expertise.