Once again, pelicans are dying on the north coast, and once again it is due to the negligence of humans.  Brown Pelicans, once endangered by DDT, are being contaminated by fish waste and oils.  This destroys their waterproofing and they die of exposure.  In 2011 the HWCC rescued 50 pelicans from Crescent City to Shelter Cove.  Already this year we have rescued over 40 pelicans and there are still more needing our help.  Once again we need your help.

Many dead pelicans have been found on area beaches and up to 60 oil contaminated birds have been spotted in the Trinidad area.  Sick birds have also been spotted in Crescent City and on Woodley Island.  It appears that the birds are once again getting into fish scrap bins or are being fed fish scraps by local fishermen.  The oil contaminates their feathers and they lose their waterproofing leaving them vulnerable to the cold.  The birds then die of exposure and starvation.

Help us by spreading the word.  Keep scrap bins closed tightly.  Don’t feed the birds.  Don’t leave fish scraps out.  Let your friends know how to protect these magnificent birds.

Last year we rehabilitated 50 pelicans and the food costs alone were around $3000.  Please donate so we can continue to help.

UPDATE: Yesterday I linked to two news stories documenting the deaths of pelicans in Solano, Napa and Los Angeles counties. The upshot from elsewhere is that, yes, a high numbers of juvenile pelicans are starving, perhaps because they have yet to learn to hunt for themselves. Failing to feed themselves, the young birds grow desperate and act strangely, begging people for food or foraging in unlikely spots.

Rebecca Dmytryk, a spokeswoman for Moss Landing’s WildRescue, says the deaths are likely natural and, given the immense cost of saving the birds – the many starving birds at the International Bird Rescue Center in Cordelia are eating about 600 pounds of fish per day – perhaps not all the young pelicans can or should be saved:

“Should we intervene? It’s a tough call!” Dmytryk said in a written statement. “It’s certainly upsetting to see a starving baby pelican on the beach, but are we doing the species a disservice if we take in all the weak ones?” 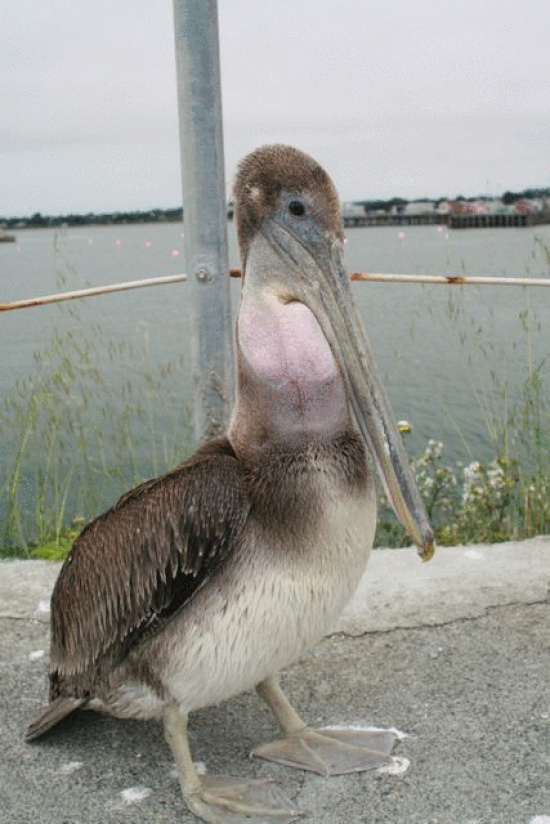 Back home, Humboldt Baykeeper posted about the situation on Facebook:

“Cyclical die-offs of juvenile seabirds such as common murres are typical when many young birds fail to survive their first winter. It is less typical to see in summer, but something is causing starvation in juvenile pelicans in Trinidad, Santa Cruz, and Southern California.”

Hi Everyone,
Like the rest of the coast, at the end of June we began to see emaciated hatching year Brown Pelicans coming into care from all of Humboldt and Del Norte counties. Typically found disoriented and grounded, we did not suspect anything unusual. We’d already heard that our colleagues in Morro Bay had 20 young BRPE in care and we began to prepare for a similar influx. By July 4 we’d treated a half dozen. On the 7th and 8th, however we began to get calls from all over - by the 9th we had 12 in care.

9 July we received a call that several dead Brown pelicans were on Trinidad beach, perhaps as many as 12, and that there were a few sick looking birds that needed help. We went to investigate. I was very disheartened to see approximately 30 soaking wet HY pelicans in the water, on the rocks and on the fishing dock. We captured 9, took them to our facility at Humboldt Wildlife Care Center, and went back and captured another 9. The next day we captured 9 more.

As of now, we’ve captured 43 in Trinidad, as well as another 30 from around the North Coast.
Also, as I’ve reported previously, witnesses in Crescent City have described ailing Pelicans (6 reported) being run down and killed with vehicles around the fish cleaning station.
Today, however, a team was sent to Crescent City to investigate the situation. Besides capturing 10 contaminated BRPE (all HY), over 40 impacted birds were seen, as well as obvious contaminations occurring while they were there. Many birds were observed to have Salmon or Rockfish carcasses lodged deep in their pouches.

I’ve also received reports of impacted birds on Gold Bluff beach, above Orick. This will be a difficult location to access without permission from the NPS, although I’ve been invited to go out there with a commercial smelt fisher who doesn’t want the Fisheries to take the rap for these injured Pelicans. This person has described what is likely to be feather lice as the culprit, and also believes these pelicans are somehow “tame.” He described them as suicidally diving into rough surf and being thrashed to the beach. Other fishers have described BRPE attacking their boats and “stealing” their anchovies.

We expect to start washing these birds tomorrow here at HWCC. While we were initially prepared for the idea of 60-100 birds, the reality is that we already have 70 and reports lead us to believe that another 60 would be easy to capture. If so, our facility will certainly be taxed, although I do feel that with support we can make it work.

He included the following photographs are from Crescent City Harbor taken July 12: 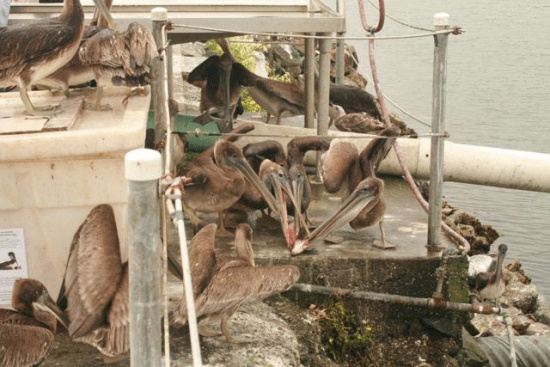 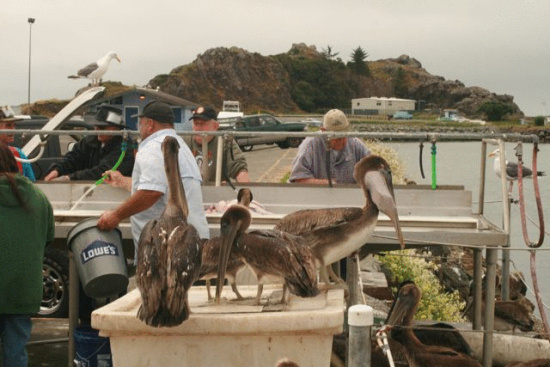