One Day Before Foreclosure Sale, Tom Dimmick of Reggae Rising Files for Bankruptcy »

Crime Appears to be Increasing Against Growers 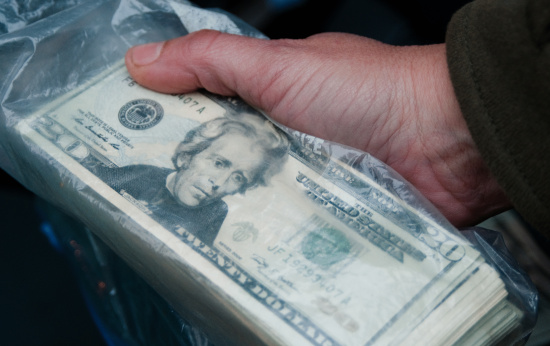 “The only way you can be an outlaw is to be honest,” claims Erin who rode along with her friend Bess to sell some pounds in the Bay Area this last year.  Selling cannabis is a way of life for many here on the North Coast of California but recently those who grow and sell marijuana appear to wind up as the victims of crime more frequently. The code of honor that allows growers to hand over tens of thousands of dollars worth of product safely, walk away for a day or a week, and come back to cash in the exact amount specified is either being broken more or possibly being reported more. In any case, press and law enforcement are reporting an increasing number of crimes where growers are the victims of theft either by fraud, stealth or violence.

Both Erin and Bess have recently experienced this themselves. A several months ago they rode to the Bay Area with a few pounds of pot and the deal went bad.

Everything was normal—if exchanging pounds for cash can ever feel normal. Bess drove down to the Bay Area with four pounds of indoor Sour Diesel. She had done this deal already several times in 2011 and multiple times in the years before that. Cautious as always, she brought Erin with her. Erin had a 215 so that if pulled over by law enforcement, the scripts of both women would cover 4 pounds. “I was stopped already this year,” Bess explained. “But I never drive without insurance—enough script and only a little pot..no money pens, no money counters.” She says she is just selling her excess medicine.

When she entered Vallejo, she sent a text to long time contact, Herbie. He had called her a few days earlier. “Hey, Auntie, can you come and see me?” Same code as always. He had called her a lot since they had known each other. The calls had started in 2006. Now they came a couple times a month. Sometimes just to chat. “He courted me for a long time,” she told me.

Interesting that she uses loving terms to describe the business transaction of exchanging pot for cash.

“Oh, Auntie, Oh Sweetie,” he would say she told me. “How’s the family?” She estimates she sold him 80 pounds over the years. She says she’s not a big grower. She says she’s “a little boutique grower—just enough to pay my bills.”

She’d partied with Herbie. Hung out with him. They had exchanged family news. This time was no different. Like normal, they met in the parking lot of the club he worked. He was driving a silver Blazer, late 90’s, two door, and lowered. Herbie got out and met her. He looked at the pounds. They chitchatted while waiting, like usual, for the money to arrive. His wife had just had a baby.

Like the last few times, the same fancy white 2 door Mercedes with red highlights glinting off of black rims drove into the parking lot. “Hey, here’s your guy,” she said. She had seen the car before. Herbie walked to get the money from the driver. He came back with a half gallon Ziplock packed with greenbacks bundled into groups of a thousand dollars each. Though he was discreet because it was a public space, when he handed it over she could see the entire $10,000 in stacks. She handed over the pounds she had brought down from Mendocino.

As she started to open the bag, he smiled and said, “Hey, I’ve got to go. New baby, ya know. Just let me know if there’s any problems.” Normally, he would stick around to make sure she was happy, that the money was right. Mistakes happen. Everyone knows it. It is hard to keep accurate count of cash when such large amounts are involved. But today he was in a hurry.

Being a mom, she understood and waved him off. He was backing out of the parking lot when she pulled apart the plastic seam at the top of the bag… “As soon as I opened the bag…it didn’t smell like money.” She and Erin pulled it out. “The paper felt different….It felt grainy but if I’d of had gloves on, I’d never have felt the difference,” Bess explained. Later, though, she’d wish she had gloves. Her fingerprints were all over the bills.

She sent a text to Herbie but he never responded. Frantic, she sent another. Still no response. In disbelief, she and Erin compared the “money” with twenties they had already. The paper they’d been given looked real. There was 2,500 in hundreds. The rest in twenties. But it felt and smelt wrong. She just knew it was fake.

“What do we do?” The two women looked at each other. Eventually, they decided maybe they were wrong. Maybe the bills were real. So, they took a hundred into a Safeway. The clerk never even looked at it twice or swiped a pen over it. She just shoved it into the drawer.

Terrified, they went back to the car. They had passed counterfeit money. Now maybe they had committed a federal offense. And the feds are notoriously hostile to counterfeiters. But maybe the money was good. The clerk hadn’t done anything that would rule out counterfeit or prove it was real.

They still needed to check the bills. Bess took a twenty into the gas station nearby. The attendant swiped a pen across it. The ink went black and her blood went cold. It was bad money. And he was holding it, looking at her with what she described as “hard eyes.” She started to shake though she tried to keep her cool. Then he said, “Can’t take this. Have ya got somethin’ else.” Protesting her innocence, she handed him a real twenty and escaped out the door sweating.

This time they looked harder at the money. The serial numbers, instead of being unique to each bill, alternated between about 5 different numbers. She was holding $10,000 in counterfeit paper.

She drove home. The fake money was a black hole pulling her down into fear. Not only didn’t she have the cash she needed to pay land payments and bills and provide for Christmas, but now if she were stopped, she had a pile of counterfeit money to explain. She was afraid to go to the police. She was even afraid to send it in anonymously. “I couldn’t turn in the counterfeit money,” she said. “I didn’t want it to come back on me.” Her fingerprints were probably patted into nearly every bill as she had examined them closely. “I couldn’t ensure that I wouldn’t bring [the police] back to me.”

“I didn’t feel good about trying to cash it out…that wouldn’t be good karma.” Bess also didn’t want to get “caught passing around counterfeit money.” So, after talking to some friends, she took some pictures and then she says, “I burned it in the fireplace.” Though she did allow me to photograph some that she still had. (See above.)

“It’s embarrassing,” she says. “You think you got your business handled and this happens.” But, she reassures herself—it happens all the time lately in the Emerald Triangle. “We’re like the epicenter of fake money…I know someone who got $100,000 in counterfeit up Spy Rock last year…People don’t talk about this…’cause who do you tell?”

Lately it seems there are increasing number of incidents like this of growers becoming the victims of crimes. Erin speculates that it may be related to the problems society is facing as a whole. “The economy is going downhill,” she says, “[and] people are getting dangerous.”

Ripoffs, as growers call the thieves that break into gardens to steal weed have always been a concern but lately there has been an increase of home invasions on the North Coast related to marijuana growers.

Lt. Steve Knight of the Humboldt Co. Sheriff’s Office said in an interview last February, “We would all agree that there is a trend upwards [in violence against growers.]”

The vehicle was later located south of Garberville and the driver of the vehicle, Joshua Lee Hemp was detained. Southern Humboldt Sheriff Sgt. Ken Swithenbank was there as the vehicle was searched.  In the vehicle, he said, “I recovered paper—newspaper cut into the size of dollar bills.”  He added that the vehicle stopped in Laytonville also had similar items.

Several growers speaking off the record noted that counterfeit bills were showing up in money from their buyers.  This has occasionally happened over the years but they noted that they were hearing and seeing more incidents. These are not only from one time buyers but from buyers like Herbie who had dealt with Bess for years before passing the fake money. The buyers are loosing what must be lucrative contacts with growers that they have made large profits with over the years by passing this counterfeit cash.

Rick Adams, a retired special agent for the IRS criminal investigation unit for over 25 years, spoke to me earlier this year. There has always been, he said, “a direct correlation between cash and crime.”  And, on top of that pot is “a commodity that is easily gotten rid of…you steal 30 lbs of marijuana, it is worth exactly what you stole.”  Whereas, if you steal something else, pawning or selling it will cause it to drop in value.  “A wedding ring,” he offered as an example, “gets cents on a dollar.” Nonetheless, he said, “Historically, the domestic marijuana trade has not been a violent trade… .”  Many growers he believes don’t carry guns and “no one has ever threatened me…They were very mellow guys.”” However, this has begun to change. “Home invasions,” he explained, “were unusual…that caught people off guard.”

When home invasions first happened, growers were reluctant to approach police fearing prosecution for cultivating marijuana. But the attitude of law enforcement has helped change that. According to Lt. Steve Knight, the Humboldt Co. Sheriff’s office is putting a priority on catching violent criminals so that growers can feel more comfortable reporting problems. “Our goal is to stop the violence. We’re not thrilled with marijuana cultivation, but we want to take violence off the streets.”

In fact, Southern Humboldt Sheriff Ken Swithenbank said this February, “I can’t remember the last time a home invasion robbery victim was penalized for his marijuana.”

Still, many if not most growers are reluctant to approach law enforcement except under extreme duress. Bess and Erin don’t plan on contacting the police.  Neither do they plan on some sort of personal retaliation.

Bess says, “I know where [the buyer] lives. He left me in his car one time when he went in the store. I looked through his glove box. Got his street…I mean you got to protect yourself….[But] I’m not violent.” She kept calling for a few days but he never answered and now he’s blocked her calls.

When asked how she’s doing with the situation, she says almost cheerfully, “I didn’t get shot. I’m not in jail. I didn’t get busted for counterfeiting.” Then later she adds thoughtfully, “They say marijuana is easy but there’s nothing easy about it.”

She has basically let it go. She just wants other growers to be more cautious. “Lesson is: Check your money before your weed leaves your hands.”

Rick Adams, the retired IRS special agent, says that growers often work together to prevent crime. He talked about busts that he has been on. “The growers have a neighborhood watch. In my experience, they are very safe communities…any stranger is immediately reported up and down the road.”

Growers do apparently have a somewhat better relationship with law enforcement but most of them are still relying on themselves and increased caution in their communities for protection.