« LoCO on the Pot: Legalization is Everywhere

LoCO Media Alert: Huber and Me »

Fires Affecting Humboldt—Or Why Is It So Smokey? 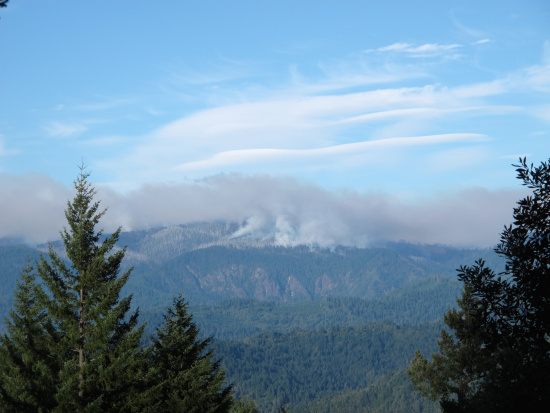 There are ten major wildfires currently burning in California. Three of them are in or very close to the border of Humboldt. 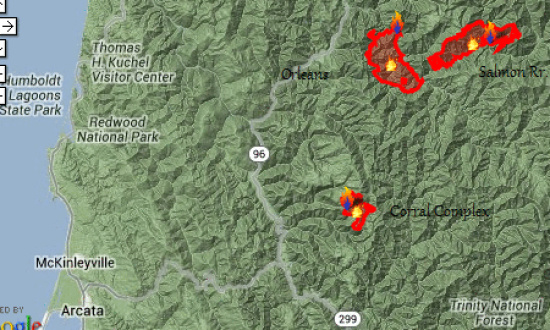 The Corral Complex, which is actually several fires, sends fingers of fire through the wildlands in northeastern Humboldt. Started on August 10th by a lightning strike, it is burning within the area cleared by two earlier fires but since regrown with bushes, etc. The snags and brush are like tinder under the hot August sun. The fire isn’t close to any town (Denny is 6.5 miles away and Willow Creek is 9.5 miles.) The current effort is to keep the fire from the Hoopa Reservation on the west and Hwy 299 to the south. The remote location and rugged landscape make fighting the fire difficult. 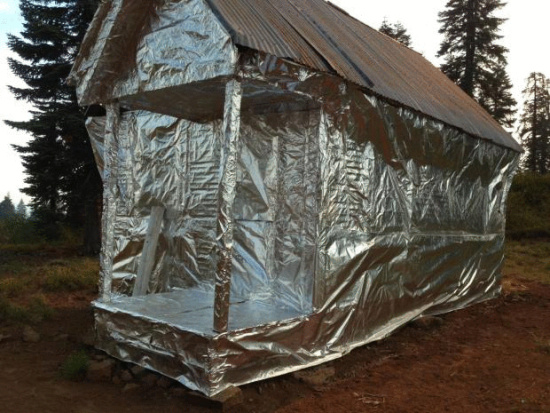 Trinity Summit Guard Station wrapped in special fire retardant material in preparation for trouble at the Corral Complex. (Photo from the InciWeb site.)

The Orleans Complex, started July 29th in Humboldt with the Dance Fire in the small town of Orleans (now contained) but the team brought in to manage it also began managing the Butler Fire (mostly just over the border with Siskiyou County) which began July 31st. Then both fires became known as the Orleans Complex. In the three weeks since these series of fires began near Orleans, the flames have endangered several small communities. Currently structures along Hwy 93 and Knownothing Creek are of the most concern. The small town at the Forks of the Salmon is being pinched by this incident and the Salmon River Complex. Inhabitants are under an Evacuation Advisory. 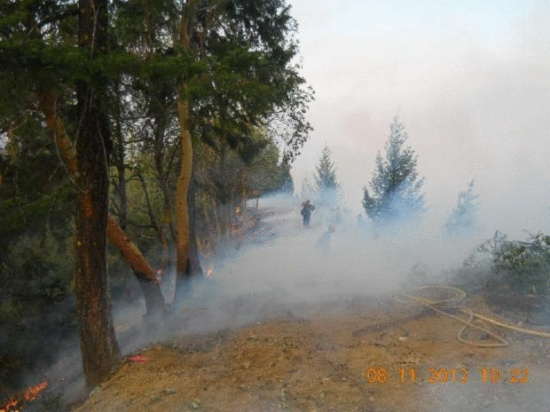 Photo of crew working on the fire lines designed to stop the flames from spreading (from InciWeb.)

The Salmon River Complex, also began July 31st. Mainly it consists of two fires, the Boulder and the Shelly, which have grown together. The small town of Sawyer’s bar on the east flank of the fire is currently of most concern. There is an “Evacuation Advisory…in effect for all residents along the North Fork Salmon River from Kelly Gulch to Idlewild and Mule Bridge to the Marble Mountain Wilderness Boundary.” See map below for how the fire is advancing towards the community.

Smoke, mostly scarce in western Humboldt through most of the month, began settling in for a couple of days. Resting on hills and laying heavily in the valleys, air quality has become an issue for the residents of the county. The US National Weather Service out of Eureka put together the below graphic showing how smoke not only from these fires but from as far away as eastern California and Oregon is spreading into the county. 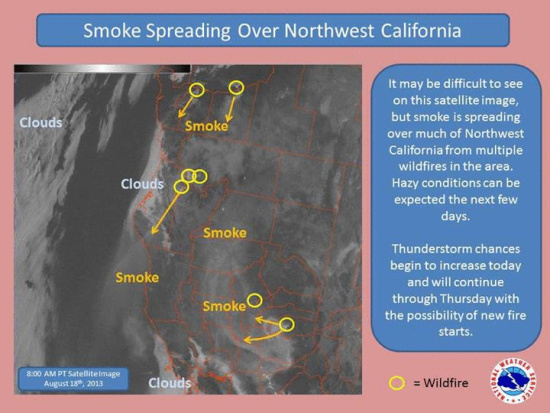 Lightning Storms are predicted also. Weather patterns over the next few days are unlikely to help the situation. According to the National Weather Service, thunderstorms will be developing starting this afternoon and going through Wednesday.  These will possibly bring more lightning and, consequently,  increased chance of fire. Thunderstorms are not predicted for Humboldt today but for Mendocino and Trinity Counties.  But, by Monday, much of Humboldt is expected to be experiencing the storms and by Tuesday, eastern Del Norte will also be affected.