« MEDIA MAVEN: ‘Can’t We All Just Beat Each Other Senseless?’

HALLELUJAH! The Trinity Restraining Order is Lifted, and the Water Will Flow

From Regina Chichizola of the Hoopa Valley Tribe in Fresno: 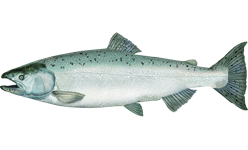 A federal judge issued a decision lifting a restraining order holding back releases of Trinity water into the Trinity River  to advert a Klamath River fish kill. The decision came after days of protests from a large group of Hoopa Valley Tribal members. Tribal members protested  in Fresno, California at the Westlands Water District board meeting on Tuesday and outside the Fresno courtroom, and in Sacramento, California outside a fisheries hearing at the California State Capital building on Wednesday.

The Trinity River is the only out of basin diversion into the Central Valley Project, and is also the Klamath River’s largest tributary. Central Valley Irrigation interests, Westlands Water District and the San Luis & Mendota Water District filed a lawsuit against a government decision to release water for fish on August 7th. The Hoopa Valley Tribe and Pacific Coast Federation of Fishermen’s Associations have intervened in the case on the side of the government.