« HALLELUJAH! The Trinity Restraining Order is Lifted, and the Water Will Flow 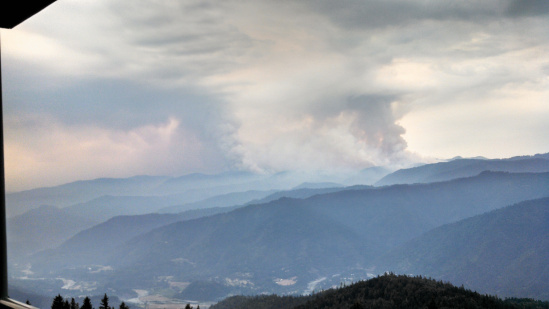 Over the last few days the Corral Fire which ignited from lightning on August 10th grew to over 10,000 acres. Above and below are two photos which show the fire expanding. Above is a photo taken three days ago. Below is one taken yesterday. The smoke columns are much larger in the second. 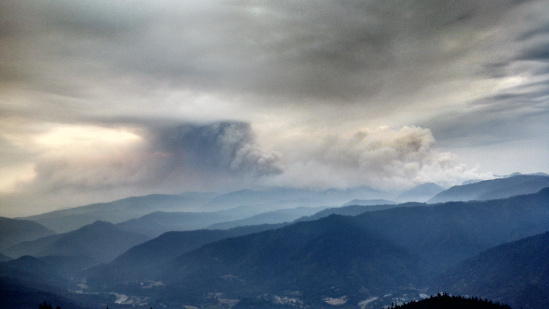 According to the Environmental Protection Information Center (EPIC), fire currently burns less than a mile from tribal lands (see map below.) 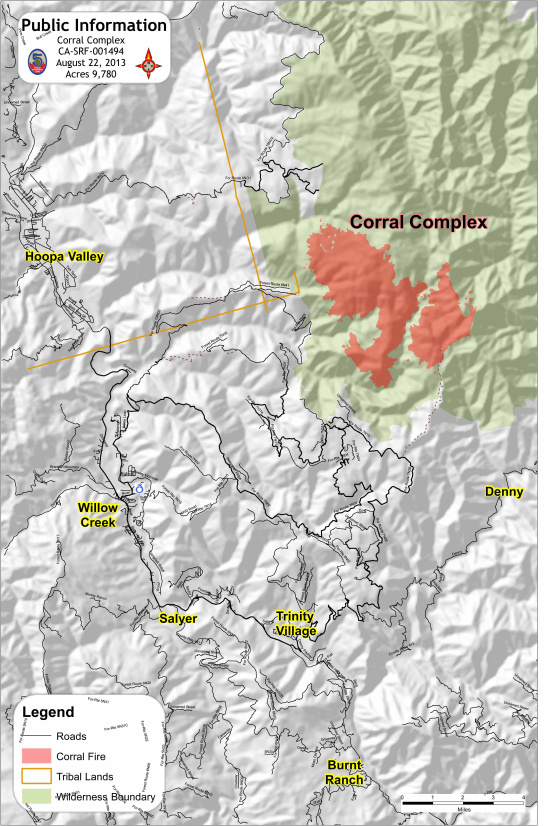 August 22 Map from the InciWeb

Plans, the organization says, are underway to use bulldozers and other heavy equipment to create fire lines—areas cleared of burnable materials—between the fire and tribal land.  This concerns EPIC. A post on its site urges supporters to call the Regional Forester and ask him to call off the dozers and use minimum suppression techniques. The author, Kimberly Baker, Public Land Advocate for EPIC, Executive Director for the Klamath Forest Alliance, and co-founder of Mid Klamath Watershed Council, asserted,

Dozerlines in the wilderness will scar the landscape for decades, increasing habitat fragmentation, damaging soils and seriously spoiling wilderness characteristics.  Fire ignited by [lightning] in our forest ecosystems is as natural as life itself and post-fire landscapes are among the most rare and biologically rich landscapes existing.

Some residents at the fires north of the Corral Complex have similar concerns in their area. The Facebook site, Salmon River & Orleans Complexities, has several people criticizing aspects of the current fire suppression efforts and arguing that fire can be good. A poster—Stormi Salamander is her Facebook name—who describes herself as a “participant and active supporter of the Somes Orleans Fire Safe Council,” wrote,

The property I live on…has undergone almost eight years of fire safe work to [remove brush] and burn most of the acreage… I think if the [current wildfire] does make it down … towards us we are in a good position because of the work that’s been done here and the back burning that was done on the large piece of land next to us… .

Salamander even went beyond thinking that the homes will be safe, she argued, “I think we will be in an even better position for years to come if the fire makes it’s way down the hill again.” She, like others, is uncomfortable with the more invasive fire suppression techniques. She insisted that letting the fire come down could be beneficial. “[I’d] rather,” she wrote, “see this happen then have fire retardant dropped in our drinking water, or cultural resources be trampled… .

Kimberly Baker from EPIC said that bulldozers (There are currently 11 working the Corral Complex) can cause long term issues for the forest. “Dozer lines compact the soil. Trees have a hard time growing on compacted soil… . Then brush comes back.  If [the lines are] not maintained, then they can turn into swaths of brush. They can last for decades depending on how wide and how often they have been used… .” 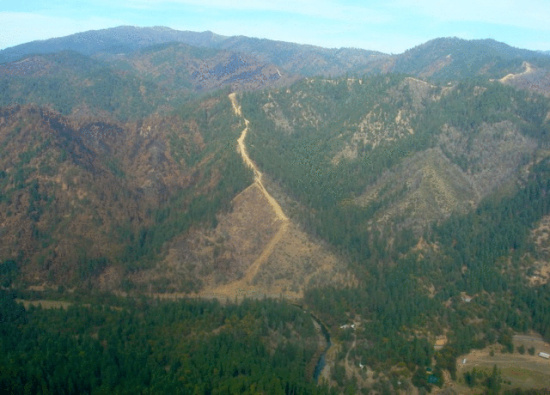 Bulldozer cut fireline taken after 2008 fire in the Shasta-Trinity National Forest on the Trinity River between Big Bar and Del Loma. (Photo provided by Kimberly Baker.)

In addition, she said, “They can cause erosion especially on steep slopes.” 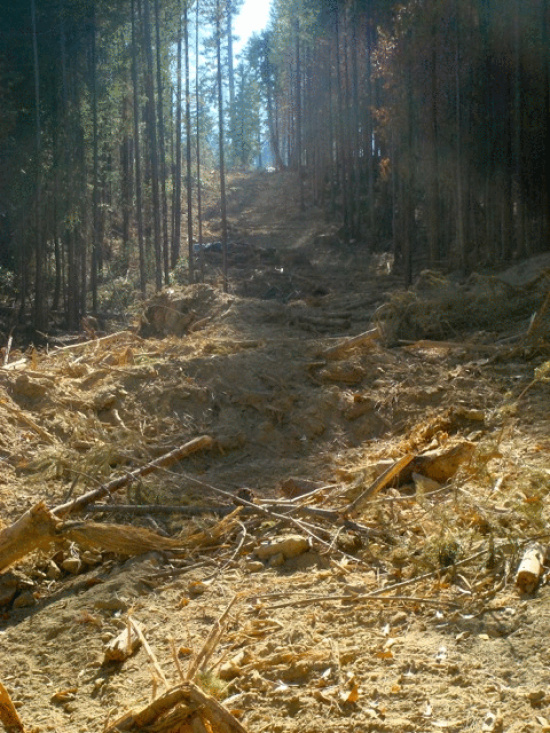 Swath of bare land bulldozed in during the 2008 fires on the Klamath National Forest on Beans Ridge. Photo provided by Kimberly Baker.

Furthermore, she worries about the use of chemicals to snuff out flames.  She said, “Fire retardant dropped into creeks can be hazardous to fish. Fish are having a hard enough time with the high temperatures and the low flows.”

In addition to the environmental damage, Baker pointed out that fighting fires is hugely expensive.  “It often costs over a million dollars a day to fight fires. The money would be better spent on creating defensible space.”

However, Paula Martinez, a Fire Information Officer for the US Forest Service, said that her agency went through a “regular request process” to do what it was doing. The Forest Service, she said, did try and use non-invasive techniques but sometimes more rigorous methods are called for.  She said in an interview yesterday that Forest Service firefighters take into account other tactics.  But if they are not sufficient, then they use what they must.”

In this case though, Martinez said, they aren’t building new fire lines on pristine wilderness. She pointed out,  “They are using pre-existing trails… They are using old road beds that were in existence.”

Asked about the concerns of residents and environmentalists concerning fire retardant, Martinez insists, “…[I]n general when at all possible, [firefighting aircraft] do avoid riparian areas—streams— for dropping the fire retardant… . The streams are pre-identified so that [the aircraft] can make every effort to avoid them.” However, she said, “Sometimes they don’t have a choice because of the fire’s movement.  [Then] they do note [where this happens.] Then they can go back in and rehab that and make mitigation so it doesn’t damage habitat.”

Retardant, writes the Forest Service, is made of relatively harmless material.

When mixed for delivery to the fire, retardants contain about 85% water, 10% fertilizer, and 5% minor ingredients. Minor ingredients include thickener (natural gum and clay), corrosion inhibitors, stabilizers, and bactericides. Minor ingredients also include colorants that make the retardant visible on the ground, such as iron oxide or fugitive color, which fades with exposure to sunlight.

Regard for human safety and the management of risk guide all fire management decisions and actions. On every fire, firefighter and public safety are the highest priorities.

Aerially-applied fire retardant reduces wildfire intensity and rate of spread, decreasing risks to firefighters, enabling them to construct fireline safely. In many situations, the use of retardant in concert with firefighters on the ground allows the Forest Service to safely meet its responsibilities… .

Indeed, when faced with fire approaching their watershed, many residents are perfectly happy to let the Forest Service do whatever they deem necessary to stamp out the flames.

Baker from EPIC, however, would like to see a good deal less of these kinds of firefighting techniques used. She pointed out what much of recent science has indicated that fire is a necessary part of the environment. She argued, “Ultimately fire is good for the landscape, especially naturally ignited, smartly prescribed, or traditional cultural burning.”

Baker doesn’t want to see firefighters or residents in harm’s way. “I wouldn’t want to put people in danger,” she said, “We are advising the forest service to use the most minimum impact suppression tactics that they can.”

Ultimately, she and EPIC would like to see more money and energy spent on prevention than on suppression. “EPIC is working with fire safe councils, forest service staff, tribes, locals and other stakeholders to come up with ideas and plans that are aimed at creating a more fire resilient landscape,” she stated.

“Ideally,” Baker said, “we would maintain pre-existing fire lines that we already have on the landscape… . We also would treat…old clearcuts.”  The brush and young single-height trees that grow up in these areas can be extremely flammable.

“Small diameter brush and trees are called ladder fuels,” she explained. “They carry the fire into the canopy. The larger trees have thicker bark and are more resistant to fire.”  The ladder fuels, she argued, should be a priority for treatment—by hand, with machines, or burnt away using controlled fire. “Clear out some of the understory,” she said. This, she argued, will keep flames from climbing up the brush and smaller trees and into the canopy.

Protecting the forest and communities within them “can take years,” she said, “but it creates jobs in restoration and stewardship.”

“We need to come up with a better plan,” Baker argues, “than fighting fires with chainsaw and bulldozers. We need a better plan that creates a defensible place around communities… .”

“There is a lot of work that we need to do to get there,” she acknowledges. But communities don’t always have time. The Corral Complex is moving towards tribal lands and 125 structures are threatened now.

This kind of pressure can cause tensions between locals and the Forest Service. Salamander, the resident facing the fires just north of the Corral Complex points out that she and her neighbors have been preparing for wildfire for years.

She notes that though she and her neighbors appreciate the firefighting crews, they also want to be listened to. She wrote on the Facebook page for those affected by the fire,

I respect and really appreciate the [firefighting] efforts… . But I also feel confident that we will get through this as a community and with the support of the fire crews if it makes its way down the drainage. There is a lot of fire knowledge and experience in our neighborhood… . I will also hold a hard line that if and when crews start to show up here, they need to be in direct and daily communication with all of us and not just start doing work like this is a military campaign on this community’s land without communication like they did in 2006. We know where fire safe work has been done on all our properties, we know where good lines are, we need to be respected and listened to for the sake of all our safety.”

Below is the August 22 press release for the Corral Complex and a video made in the very communities affected this year which talks about methods—particularly prescribed burning—which help prepare the landscape for wildfire:

Incident: The Corral Complex was started by lightning on August 10, 2013 and is burning within the 1999 Megram Fire and the 2009 Backbone Fire areas.

***RED FLAG WARNING For Lightning Through This Evening***

Current Situation: The spot fire on the north aspect of Tish Tang Point on the north flank is well established at 200 acres. Helicopters dropping water today have been able to keep it in check and it did not move. On the south flank, the fire crossed Horse Lindo Creek. Crews have been preparing contingency lines to hold the fire if it should reach those lines. The firing operation planned for today was postponed due to unfavorable weather to conduct a successful burnout. Crews will be assessing conditions over the next few days and wait for optimal conditions.

Evacuations: None currently in place. The structures potentially at risk are outside fire perimeter.

Road Closures: As of Thursday morning, no road closures are in effect on the Hoopa Valley Indian Reservation, however, due to increased fire personnel traffic, the public is encouraged to limit their use of reservation mountain roads; Big Hill Road, Mill Creek Road and Tish Tang Road. Forest Service roads 7N26, 7N53, and 7N04 surrounding the Groves Prairie Spike Camp has restricted public access due to fire crew activity. Drive Defensively!

Area & Trail Closures: For public safety and to ensure unimpeded access for firefighters and equipment, public access is restricted in the fire area.

A Temporary Forest Closure Order for the Horse Ridge Closure area is in place. This order prohibits going or being upon National Forest System lands and trails within the Red Cap, Bear Hole, Horse Ridge Trail Closure Area. It is effective from August 22, 2013 through August 26, 2013. To view the entire Forest Order and Map visit http://www.fs.usda.gov/Internet/FSE_DOCUMENTS/stelprdb5433210.pdf