« (UPDATING) Power Outages at College of the Redwoods, Classes Canceled

For All Your Hyperlocal Ambient Audio Collage Needs »

(UPDATED) Illegal Pumping Leads to Marijuana Bust—But Is It Too Late for the Fish?

Yesterday, Bruce Wayne Turner was arrested for marijuana cultivation and booked into the Humboldt County jail a little after 4 p.m. Earlier, law enforcement — reportedly from the Humboldt Co. Sheriff’s Office, the Drug Task Force and the California Department of Fish and Wildlife — raided a place off of Dootyville Road. (See yesterday’s CLMP report here.)

Reportedly, Turner is suspected of pumping from Mattole Canyon Creek which is crossed by the Dootyville Bridge and feeds the Mattole River. When water is sucked out of low creeks and summer nursery pools, federally protected fish can be endangered.

Below is a 2012 image from Google Maps. A pushpin has been stuck in at the approximate place that the pump is believed to have been located this year. 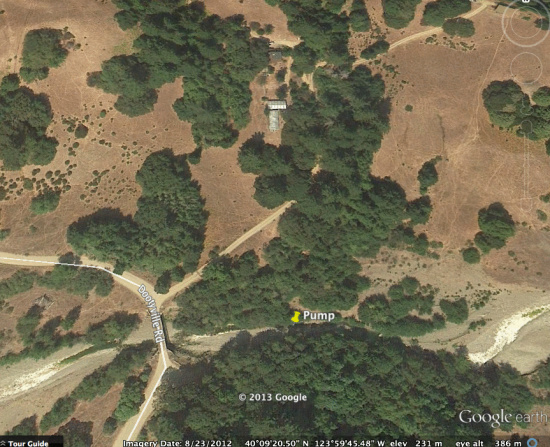 The photo below shows the creek has nearly disappeared.  The photo shows the last remaining pool near the Dootyville Bridge. 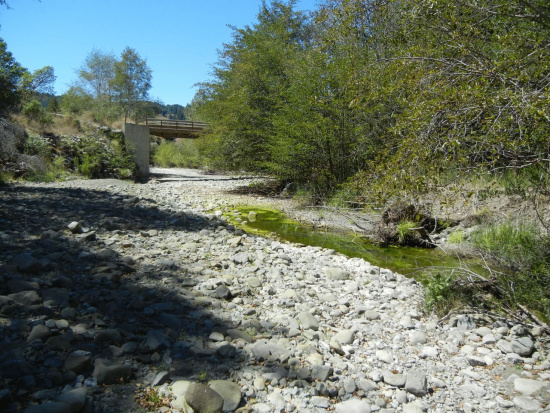 Observers say that a month ago the creek extended all the way down towards the bridge and had thousands of steelhead parr and several second-year steelhead juveniles.  This photo was taken yesterday after the pump and waterline was removed. 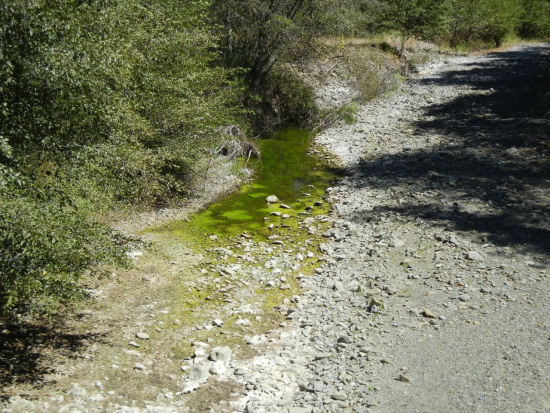 Today, a puddle with a few young steelhead and water striders remains. A strong smell of decaying algae creeps up from the dying creek. 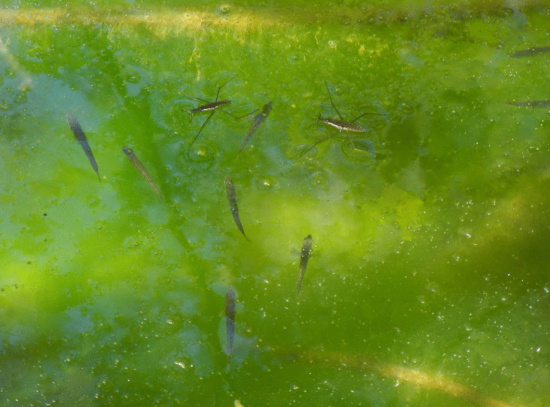 Photos taken just before the pump was removed show the Dootyville Bridge in the background. 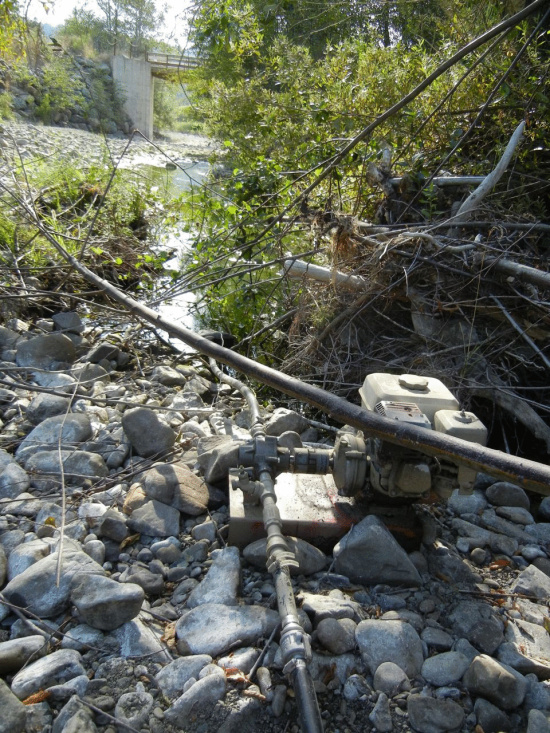 Since the early ‘90’s, intense work has gone into restoring Mattole Canyon Creek from issues related to sedimentation. In April, Dave Brooksher of the Redwood Times wrote,

After decades of restoration work, Mattole Canyon Creek is showing signs of improvement. In the early 1990s, the Mattole Restoration Council undertook a massive project excavating the creek bed, deepening its channel, reconfiguring bends in the stream, installing tree-trunks along the banks, and planting willows to stabilize the soil along a mile and a half of the waterway. Revegetation projects have established a healthy riparian zone where the reintroduction of plant and root systems have stabilized sediment along the channel, improving stream-bed scour and the efficiency with which the water moves fine sediment out toward the ocean.

Though the Lost Coast Outpost can’t speak to this situation in particular, what often occurs is that as one pool is drained, the intake and sometimes the pump is moved to another pool—repeatedly sucking away entire fish habitats. As the water disappears, predators move in. Egrets, blue herons and raccoons will eat every single fish. Sometimes the person pumping doesn’t adequately screen the intake valve and small creatures are vacuumed up to die. Fish that do manage to evade the predators are left to gasp in increasingly shallower pools.  Then they suffocate and die. Scavengers then eat their bodies leaving only the shrinking damp spot as a gravestone to the creek teeming with life that once flourished.

Insiders say the Department of Fish and Wildlife are swamped with reports just like this one and don’t have the manpower to deal with all of them. 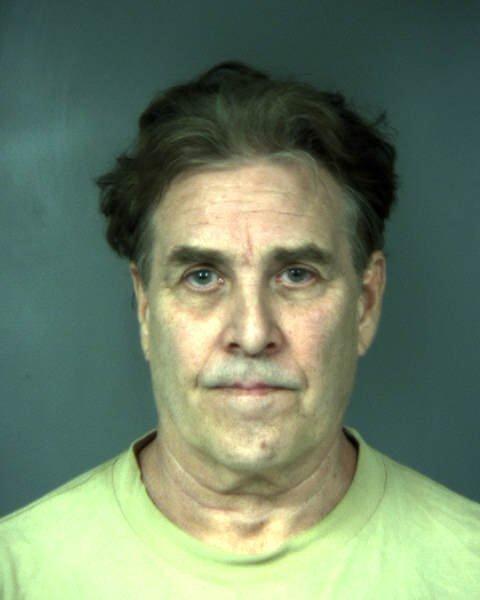 One of the locations was in the 1800 block of Dutyville Road. When officers arrived they located two people at the residence, Bruce Wayne Turner, 63 years old and his 56 year old girlfriend. Officers located a pump in Mattole Canyon Creek which was being used to pump water to the marijuana plants the couple was growing. The pump was pulling water from pools where Salmon and Steelhead Smolt were living causing the water level to drop and water temperature to heat up killing the young fish. Officers also saw there were places near the intake pipe where there was live fish. The Wardens also believed the pipe was sucking in and killing the Smolt. The officer’s located where oil was spilled in the riverbed near the pump and saw where the suspects were storing oil and gas cans in the river bed.

Officers located 877 growing marijuana plants located in two greenhouses on the property. The plants ranged in size from approximately 8” to 6’. They also located approximately $198,000.00 in cash, scales and evidence the marijuana was being sold for profit. Turner was arrested for cultivation and possession for sale of marijuana, allowing a place for drugs to be stored (all felonies ) and Fish and Wildlife code violations for altering a streambed without a permit and polluting a streambed ( both misdemeanors ). He was transported to the Humboldt County Correctional Facility where he was booked and his bail was set at $50,000.00.

Turner’s girlfriend was not arrested due to health issues. Charges are being sought against her through the Humboldt County District Attorney’s Office.

At the second location in the 3100 block of Dutyville Road, officer’s located another pump in the Mattole Creek riverbed removing water from the creek to water marijuana plants. That pump was also creating the same environmental issues and damage as the first location. Officers located a 59 year old male and his 56 year old wife living on the parcel in a residence. Officers searched the property and located 172 growing marijuana plants in two greenhouses ranging from 1’ to 6’ in height on the property. They also located approximately 4 lbs of marijuana bud and 25 lbs of processed marijuana along with four handguns, one shotgun and two rifles.

Charges are being sought against the couple through the Humboldt County District Attorney’s Office for cultivation of marijuana, possession for sale of marijuana, allowing a place for drugs, possession of a loaded firearm in the commission of a felony stream diversion and polluting a stream. They were not arrested at the time due to logistical issues with transporting them to jail.