« Man and Woman Arrested for Sexually Assaulting a Juvenile

(UPDATED) Man Wanted for Unlawful Sex with a Minor »

At the Jason Singleton Anti-Rally 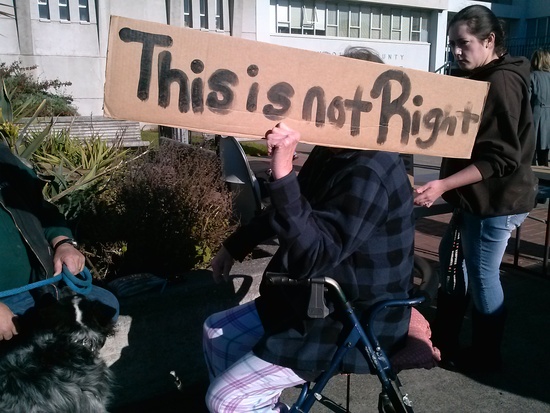 There are about three dozen people at the courthouse steps now, mostly just chatting in small groups. The theme, of course, is local attorney Jason Singleton, who raised everyone’s ire last week when threatened legal action shut down Porter Street BBQ’s Arcata location. The Porter Street action was just the latest in a long string of Americans With Disabilities Act legal suits — frivolous suits, many say — that Singleton has brought against businesses local and statewide.

Signs have been issued. One young man is wearing a suit, which seems to indicate potential legal fightback, perhaps speechifying. But as of this writing people are mostly using today’s anti-Singleton rally to mill around and catch up.

“What’s going on, Rex?” said one man, walking up to Supervisor Rex Bohn.

“Other than this shitbird, all right,” said the man, indicating the protest’s invisible antagonist.

In addition to Bohn, Supervisor Virginia Bass is here, as is Eureka mayoral candidate Chris Kerrigan. Bass has been handing out a flyer containing her thoughts about how the community can better prepare for ADA litigation. Titled “Be part of the solution,” it carefully places the blame for “legal extortion” not on Singleton or others of his ilk, but on the legislature. Bass writes that she hopes to convene a task force at the beginning of the year in order to explore potential action that local government can take to stem such lawsuits and/or help businesses who find themselves the target of one.

Actually, scratch that about the young man in the suit. It is merely a new News Channel 3 reporter.

Updates coming, if anything of note happens while I stick around. 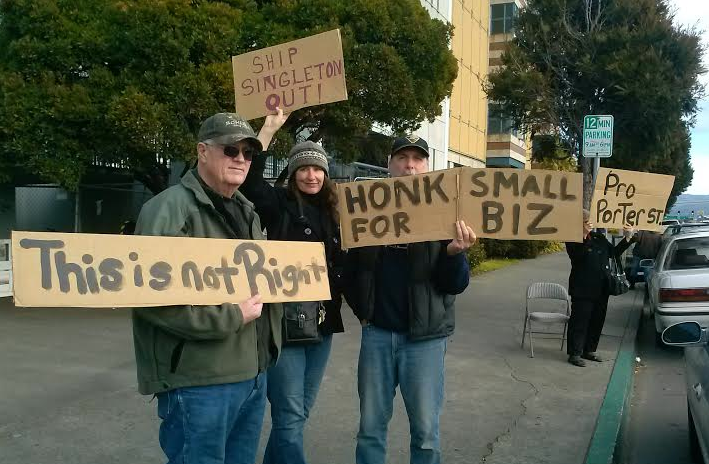