Again With the Booming » 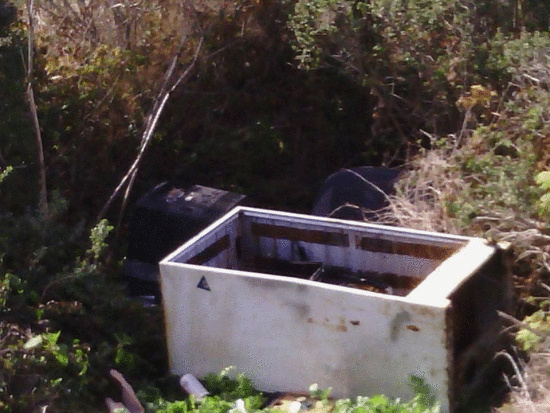 When is a Scenic Drive not scenic?  When trash is dumped over the side of the road. (Photo of illegal dump provided by Tim Haywood)

All Out SUP owner Tim Haywood is no stranger to cleaning up after others. A longtime supporter of Humboldt Baykeeper and Humboldt Surfrider, he’s collected and disposed of trash around the bay and peninsula for years, both as part of group clean-ups and on his own. But when what should have been a charming cruise down Trinidad’s Scenic Drive turned ugly, Haywood sought help. 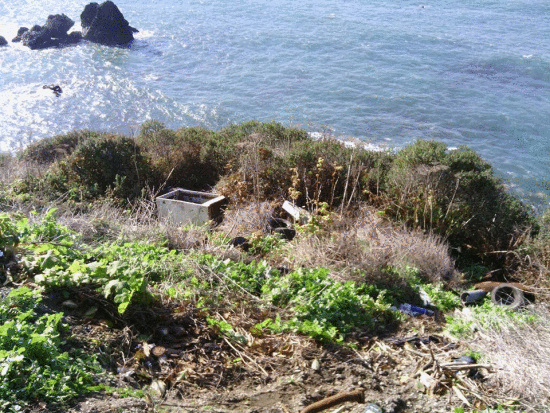 His plea for assistance, highlighted with photos of the dumped garbage, made the rounds on Facebook and eventually ended up on LoCO. Readers responded. Yesterday, Haywood and a crew of volunteers armed with trucks, winches, gloves and trash bags cleared this area; and two more illegal trash dumps.

Michael Le, who describes himself as “an avid Lost Coast Outpost reader,” was one of the people who stepped up. “When I saw the call for help, I just contacted him. I fish and crab and walk and hike in Trinidad. It is kind of like my extended backyard. When I saw someone had trashed it, I knew I had to go take care of it.” He described heaps of garbage that included  TVs,  a refrigerator, a battery, tires, insulation, syringes and much more.

But the junk stood no chance against this motivated team. “It was incredible,” Le said. “One man showed up with a dump trailer… A lady came with a work truck with a winch.” The heavy equipment proved even more necessary than anticipated – underneath the fresh garbage, Le said, lie an old truck decomposing underneath it all.”I didn’t know how we were going to get this out of there,” Le said.

That’s when the winch came in handy.”As we were digging out the chassis,” Le continued, “It was hard… 15 feet of metal. And we began saying, ‘Wherever there’s a will, there’s a way.’ We all had the will to do this, and Tim had the way for us to do it.”

Le wrapped up the experience by relating how the cleanup crew had begun the day by being angry. “We hoped that whoever did this would get their due some day.” But, he said, in the end as the trash was piled into the beds of the trucks, “We were excited to bring the cliff back to its natural beauty.” 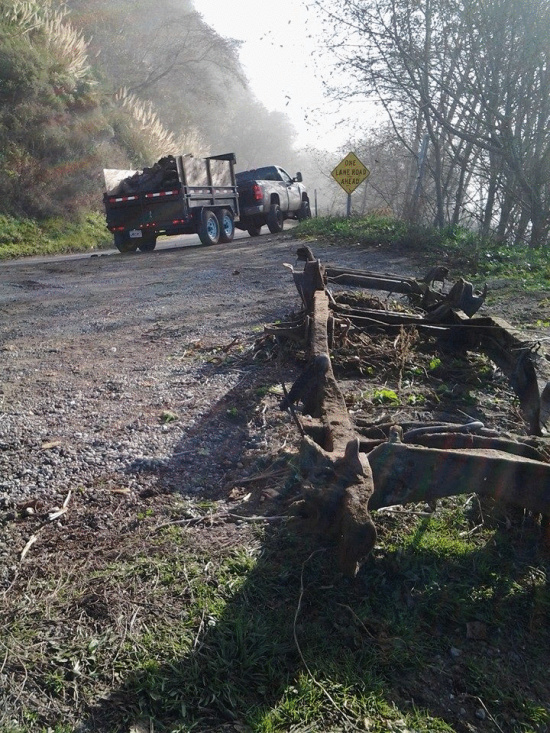 The only thing left at the end of the day was the long truck frame that would not fit on the trucks. Tim Haywood is trying to make arrangements to have it picked up. (Photo by Michael Le)

After two hours of hard work, the sites were cleared and the garbage on its way to the dump, where Humboldt Waste Management Authority waived the usual fees involved. Executive Director Jill Duffy elaborated via email that HWMA does sometimes waive tip fees for some illegal dump clean-ups. Usually the agency ask that the reporting party coordinate directly with our member agency in advance so tonnage can be estimated, tracked and verified.

In this case, Duffy said, the posted photos provided an idea of the type of material strewn over the side and an approximation of volume. While HWMA does absorb costs for a variety of events and groups including California Coastal Cleanup Day, Lost Coast 4x4’s and Eureka High Schools Wrestling Team Community Clean Up, the waiving of fees impacts the agency’s limited resources. It’s far preferable for disposers to bring garbage to the dump for proper recycling or disposal (i.e. appliances are recycled). “The County Public Works Dept spends an unbelievable amount of money disposing of roadside dumps, and Environmental Health (over the years) has secured grant funds for big cleanups (South Spit, Johnson Ranch Road). The cities, Arcata in particular, annually deals with picking up ‘free’ materials left along sidewalks towards the end of the school year,” Duffy concluded.

One of the lessons this should teach people is to think about the big picture, Haywood said. “I wish people would start living more sustainably, think about what they buy and about what they do with the byproducts,” he said. “I just think it’s really important to make a mindful effort about what we buy and to think ahead: ‘What’s it packaged in and what are we going to do with that?’”

He downplayed his role in the clean-up. “All I did was basically say, ‘Hey guys, let’s do something. Other people pooled resources, used their finances and time to help out… It’s a credit to this community.” 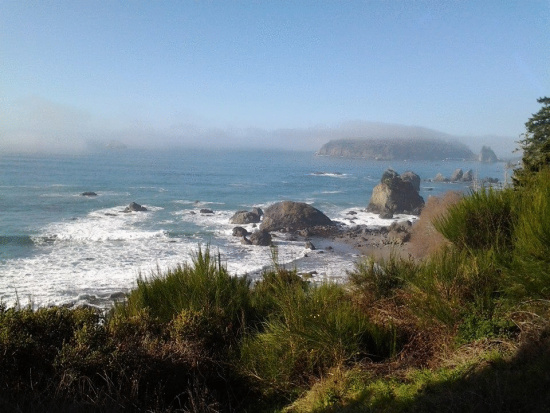 Scenic Drive once again lives up to its name. (Photo by Michael Le)