« Because We Haven’t Had Any Kinetics Drama in at Least a Month: Ferndale Sculpture Museum at Risk

If you’ve been following the Lost Coast Outpost‘s “Elsewhere” section – and why on Earth wouldn’t you be? – you’ll have noticed that in the last few days the stakes have been raised.

In between your automatic news alert updates from “Fred’s Humboldt Blog” and the “Samoa Softball” blog and the “Times-Standard” and the like, you’ll have recently found handcrafted, artisanal links to stories from the likes of the Los Angeles Times, the Seattle Times, the Daily Mail (U.K.) and many others.

The stories so linked weren’t just the standard national news blather; they were stories that should be of particular interest to Humboldt County residents. They included a peek at the implementation of Washington’s new legal marijuana regime, coverage of direct-action protests against the Willits Bypass and an interview with the Shelter Cove man who survived a sneaker wave that took his girlfriend’s life.

Most of these were thanks to the work of the newest member of Team LoCO – McKinleyville’s Gina Rimson, who has been sending me multiple news tips from out-of-the-area media just about every day for … God, almost a year and a half, now. These stories, without fail, have been just the sort of thing that the LoCO itself would cover were we blessed with unlimited budget. But more often than not they just floundered in my inbox because I couldn’t find 15 minutes to think of something interesting and original to say about them.

So why not cut out the choke point, the middleman – me? That’s just what we’ve done. Gina now has the ability to pop these things up in the LoCO aggregatron whenever she sees fit … which is often, thank goodness, because Gina is awesome.

Let her introduce herself to you further after the jump! 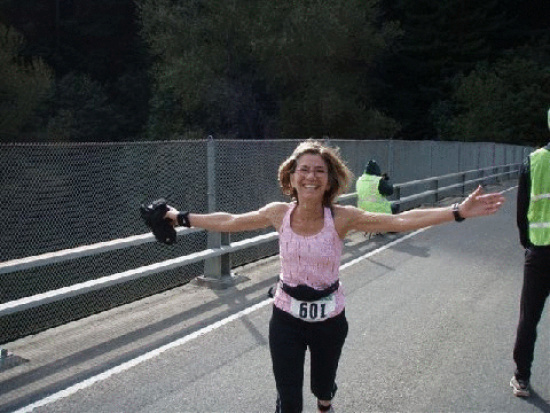 I get up very early, so I skim major online newspapers and look for certain topics — environment, pot, state politics, water and fish issues, Native American culture and politics. Basically the issues that I covered as a reporter for the Times-Standard all those years ago. They’ve always interested me. News has always interested me, since I was a kid. Ah, memories: riding on the CAMP helicopter in the dog-and-pony show raids for the news media. I recall the DOJ burning the pot at A.W. Way County Park, another time on the Mattole Beach! Using diesel fuel! What a mess.

Another helicopter ride took me over the 101 Redwood Bypass … several giant old growth trees were felled where the Drury Parkway connects to 101 on the southern end. I was there when one fell! The forest really does go quiet. The unpaved new road looked like a giant swath of red earth cut into the forest. The mid-1980s was the period when City of Eureka was begging Exxon to bring construction jobs to Eureka by building a giant oil rig platform. It was also during the godforsaken takeover of Pacific Lumber by Maxxam. I had to learn what a subordinated debenture was to write up that complicated story of junk bonds, blind holding companies and information buried in SEC filings. (That’s where tripling the timber harvest was projected to last 15 years before the mills would close).

After reporting, I moved to NYC for two years, changing careers and seeing the stock market plummet in 1987. I was two blocks away and saw masses in the street going nuts over the fall of 508 points. I also went to see Darryl Cherney and some others from Earth First! carry small trees to protest in front of the Stock Exchange one day in 1988, I think — protesting the Maxxam take over. A girlfriend that was a reporter in Eureka called me in NY to go take a look, so I did since I worked two blocks away. Hippies on Wall Street!

After NY, we moved back to Humboldt, where I worked in the investment field as an operations manager and advisor for 10 years. Later, as a broker, I helped former Pacific Lumber shareholders (think Scotia and other Humboldters) apply for and receive something like $28 per share for every share they sold in the 1980s during the takeover. The shareholders sued and won because they were underpaid in 1985, when Maxxam paid around $42 per share during the take over. (My dollars may be a bit off.) Funny how I reported on the screwing and then was involved helping local people get more money out of the forced stock sale years later … even if we didn’t save the timber or the jobs.

I’m still a news junkie, but I have a life — two kids in their early 20s and a husband, an orchard, a garden and two poodles in McKinleyville. I became a stay-at-home Mom and my husband’s a part-time business administrator. Over the past dozen years, I’ve spent nine years on the McKinleyville Land Trust Board, and was treasurer for Temple Beth El in Eureka for five years. I’ve run a few half marathons over the past few years, the Humboldt Redwoods/Avenue of the Giants being the best course ever! Although Clam Beach and the Foggybottom runs are fun when the wind’s not blowing…

I love Humboldt! I guess if I had to pick an area that’s my dearest, it would be the Mattole Valley. It’s magical.